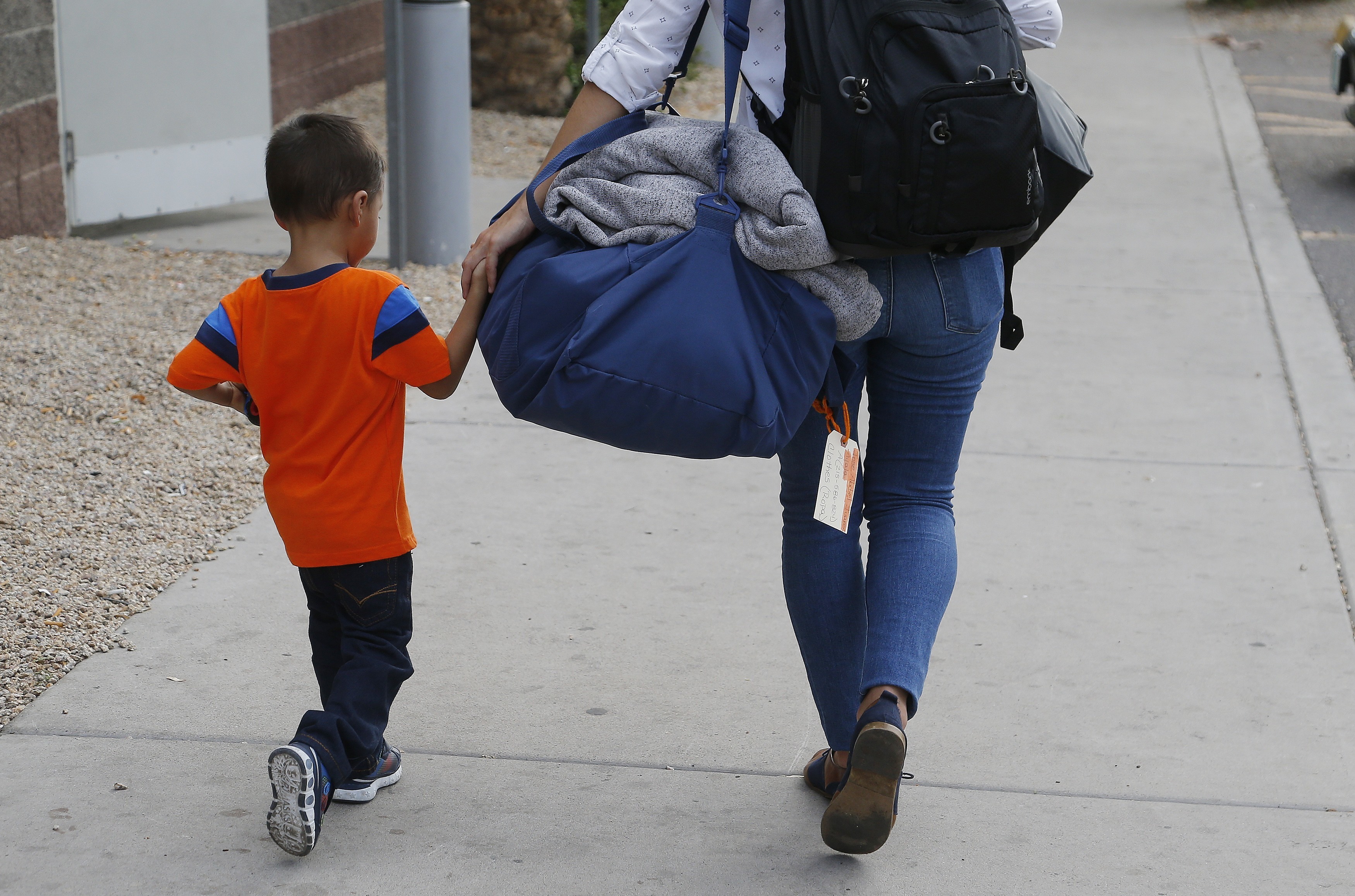 A representative of the Southern Poverty Law Center helps 3-year-old Jose Jr., from Honduras, as he is reunited with his father 10 July in Phoenix, Arizona.

The Trump administration has summoned at least 70 children under 1 year old to immigration court for their own deportation proceedings since 1 October 2017, according to new U.S. Justice Department data provided exclusively to Kaiser Health News.

These children, who may be staying with a sponsor or in a foster-care arrangement, need frequent touching and bonding with a parent and naps every few hours, and some are of breastfeeding age, medical experts say. They’re unable to speak and still learning when it’s day versus night.

The number of infants under age 1 involved has been rising — up threefold from 24 infants in the fiscal year that ended 30 September 2017, and 46 infants the year before.

The Justice Department data show that a total of 1,500 ‘unaccompanied’ children, from newborns to age 3, have been called in to immigration court since 1 October 2015.

Roughly three-fourths of the children involved are represented by a lawyer, and they have to make their case that they should stay in the United States.

But some of the infants were deemed ‘unaccompanied’ only after law enforcement separated them from their parents during the Trump administration’s ‘zero-tolerance’ immigration policy. The children were sent to facilities across the U.S. under the supervision of the Department of Health and Human Services (HHS).

“This is to some extent a … crisis of the creation of the government,” says Robert Carey, who previously headed the Office of Refugee Resettlement, which takes custody of unaccompanied minors. “It’s a tragic and ironic turn of events.”

Younger children are also considered unaccompanied if they enter the U.S. with an older family member who is not yet 18. The data do not clarify which children arrived that way and which were separated from their parents.

The Justice Department did not respond to a request for further data about where the children are housed. They could be in a foster-care home, at a group home, with a relative or sponsor or reunited with a parent. The HHS, which operates the refugee resettlement office, did not provide comment by publication  time.

In previous statements, the government has argued that separation — and its consequences — are unfortunate but unavoidable under the law.

“There is a surefire way to avoid separation from your children. Present yourself legally … or stay back at your home country, and go through the process others do,” HHS Secretary Alex Azar said on a media call earlier this month. “None of us want children separated from their parents. I want no children in our care and custody.”

The number of unaccompanied children called in to court since 1 October 2015 swells to 2,900 if children up to age 5 are included. The total will rise between now and 30 September, when the fiscal year ends, notes Susan Long, a statistician at Syracuse University and director of TRAC, a repository of immigration and federal court data. There’s also an ongoing backlog in entering the data.

In June, a district judge in San Diego, California, ordered the government to reunify families within a month, specifically directing them to unite children younger than 5 with parents by 10 July.

Too young to speak:

The HHS reunited about half of those children by 12 July — 57 out of 103. Others, the government said in a statement, could not be placed with a parent, citing in some cases “serious criminal history” or parents currently being in jail.

In 12 cases, those children’s parents had already been deported. In another, the government had failed to figure out where the child’s parent was located, and in another, the parent had a “communicable disease,” the HHS said.

The Department of Homeland Security, which issues the court orders, also did not respond to a request for comment.

In the removal cases, children have no right to an appointed lawyer but rather to a list of legal aid attorneys that the child’s current caregiver can contact.

And young children rarely know the details of why they fled their home country, especially without a parent present, notes Eileen Blessinger, a Virginia-based immigration lawyer who has been aiding parents.

“Think about it as a parent. You’re not going to tell your child they might be killed, right?” she says. “A lot of the kids don’t know.”

Immigration court, which is an administrative unit of the Department of Justice, is different from typical courts. It handles ‘respondents’ who may be too young to speak, but has no social workers or legal remedies focused on the best interest of a child, says Lenni Benson, a New York Law School professor and founder of the Safe Passage Project, which provides legal services to migrant youth.

“An immigration judge has no discretion,” Benson says. “There’s no ‘I’m hearing the mom wants the kid; I’m going to decide what’s best,’” she says. Instead, “it’s ‘the government has charged you with being removable from the U.S. Do you have evidence to show you have a right to be here?’”

Benson recounts being in immigration court in 2014 when a judge asked for a crying baby to be removed from the courtroom. She says she paused to inform the judge that the baby was the next respondent on the docket — and asked that the child’s grandmother stand in.

The stakes for the babies, and any migrant fleeing violence, are high, says Paul Wickham Schmidt, a former immigration judge who retired in 2016 after 13 years on the bench in Arlington, Virginia.

“Final orders of deportation have consequences,” he says. “For something that has a very serious result, this system has been described as death penalty cases in traffic court.”

Ashley Tabaddor, president of the National Association of Immigration Judges and a judge specializing in juvenile cases in Los Angeles, acknowledges that the administration narrowed a directive on how much judges can assist juveniles in court. Still, she says, judges do their best to ensure that young children get a fair hearing.

Justice Department data show that asylum denials are at a nearly 10-year high at 42 percent, and the Associated Press reported that the administration has raised the bar for making a successful case.

At the same time, children can be strapped for resources, Blessinger says.

She describes one client whose 7-year-old daughter received legal support from a New York-based charity. Even in that case, she says, the organization acted simply as a “friend of the court” — rather than a full-fledged attorney — requesting delays in proceedings until the child and mother could be reunited. That finally happened 17 July, she says.

“It’s the saddest experience. These people are not going to be recovering anytime soon,” she says. “The parents are crying even after they’re reunited.”