Could a virus cause autism? 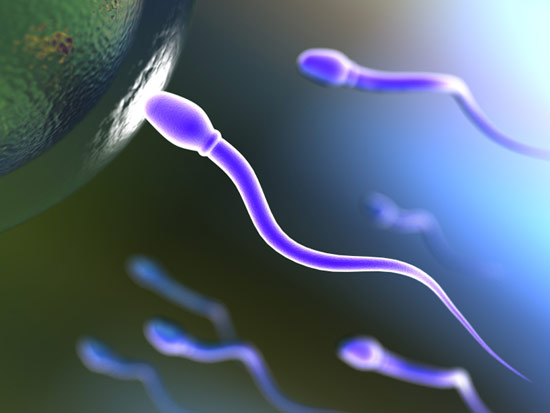 Strong swimmers: Sperm move like motorboats through the vaginal tract, and viruses may hop aboard.

For some individuals, autism begins at conception, when an infected sperm cell transmits a virus to the egg: that is the provocative new hypothesis of a group in Italy based on data from brain tissue and semen.

Last year, Antonio Persico and colleagues reported that traces of polyomaviruses — a family of common viruses that can cause tumors — are more likely to crop up in postmortem brain tissue of individuals with autism than in that of healthy controls1. In unpublished work, the researchers have also found that seminal fluid from fathers of children with autism is more likely to carry polyomavirus than is fluid from fathers of healthy children.

How a sperm might transmit a virus, and how the virus would then cause autism is unclear, which makes some experts deeply skeptical.

“It’s something that may serve as pioneering work, but needs to be completed,” notes S. Hossein Fatemi, professor of psychiatry at the University of Minnesota.

If it’s true, however, the theory could explain the ‘missing heritability’ puzzle of autism. Autism has a strong genetic component: identical twins are much more likely to both have the disorder than are fraternal twins. Yet, so far, researchers have identified relatively few DNA variants to account for this genetic risk.

“It may well be that each and every one of these families has a [unique] mutation,” notes Persico, associate professor of child neuropsychiatry at the University Campus Bio-Medico in Rome. “But I think we should keep our minds open to the possibility that what is being passed down from parent to child is not human DNA.”

Instead, he says, what’s being passed down may be viral DNA. The rubella virus, for example, can cross the placenta and directly infect the fetus. A string of studies in the 1970s found that if a woman is infected with rubella in early pregnancy, her risk of having a child with autism significantly rises2. Since then, a large body of work on animal models has shown that maternal immune response during pregnancy can disrupt fetal brain development.

“If this hypothesis is borne out with further work, it has enormous implications,” says Paul Patterson, professor of biological sciences at the California Institute of Technology, who has done much of the animal work on maternal infection. “If a virus is vertically transmitted, then what would appear on the surface to be genetic could actually be environmental.”

Little is known about how sperm transmit viruses, but there is some evidence that it’s possible. For example, case studies of artificial insemination have shown that the hepatitis B, hepatitis C and HIV viruses, among others, can directly pass from donor sperm to the woman receiving it3.

No one has demonstrated definitively that viruses can directly infect an egg via sperm, but a few studies have shown that viruses and sperm can interact.

On their own, viruses rely on random diffusion to move through fluid, like a raft floating on the open sea. That makes it difficult for them to cross the thick mucus that lines the vaginal tract, notes Katharina Ribbeck, assistant professor of biological engineering at the Massachusetts Institute of Technology.

By contrast, sperm move like motorboats. “Sperm have evolved to swim through this spider web of mucus,” she says. “Viruses might hook up with sperm to take advantage of their motility.” Supporting this idea, in 2009 Ribbeck’s group showed that the human papillomavirus can bind to two specific regions on the head of a sperm cell4.

If a virus could infect a fetus and cause autism, then traces of its genome should appear in the brain. In the study published last year, Persico’s team tested this by searching for eight viruses known to affect the brain in postmortem brain tissue from 15 individuals with autism and 13 controls. They analyzed tissue from the primary auditory cortex, which has shown abnormalities in imaging studies of people with autism.

Other postmortem studies — some based on the same tissue used in the new study — have reported inflammation in the brains of those with autism. This could be a consequence of early-onset viral infection, Persico says.

Some experts strike a note of caution, saying the results are intriguing, but more data is needed to show that parent-to-child transmission of a virus can cause autism.

It could be, for instance, that individuals with autism have an impaired immune system, which leads to abnormal regulation of viral DNA in their brains.

“These viruses could come from a number of sources, prenatal or postnatal,” Fatemi says. “To really clinch this [hypothesis], it will be very important to know from whom these viruses were transmitted, from mother or father.”

Fatemi points out that most animal work on prenatal infection has found that viruses cannot cross the placenta. In January, his group published a study in which they infected pregnant mice with the influenza virus. Although infection changed the expression of many genes in the fetal brain, the researchers found no traces of the virus itself in the placenta — suggesting that the fetal abnormalities are caused by the mother’s immune response, rather than by the virus5. Some studies have suggested that polyomaviruses can cross the placenta6, whereas others found the opposite7.

Persico is investigating a possible paternal link first because sperm cells are more easily accessible than egg cells. “It’s just a practical and ethical issue, not an experimental one,” he says.

His team is genetically screening semen samples from fathers of children with autism, fathers of healthy children, and infertile men for traces of viruses. Preliminary data from about 70 men shows that seminal fluid from autism fathers is more likely to carry polyomavirus than is fluid from controls.

Still, the research is in its infancy, and Persico hopes to extend it to other viruses. Last month, for instance, he reported that there is no trace of the XMRV virus in blood samples or in postmortem brain tissue from people with autism, nor in semen samples from fathers of children with autism8.

“I definitely want to look more broadly at other viral sequences,” Persico says. “I’m pursuing polyomavirus because I have those data, but I keep myself very much open-minded.”