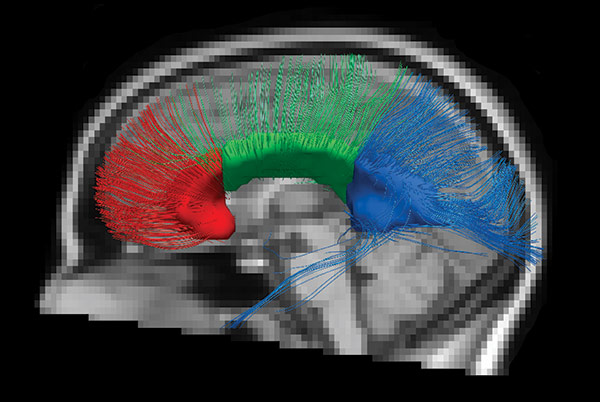 Brain bridge: The corpus callosum, which links the left and right hemispheres of the brain, changes over time.

The corpus callosum, a thick bundle of nerve fibers that links the brain’s left and right hemispheres, develops differently in children with autism, a nine-year study has found.

The findings, published 11 March in Molecular Autism, provide a clue to the pathology of autism1. They are in line with disparate data indicating that people with autism have faulty connections between different brain regions. The work also highlights the importance of studying brain changes over time.

“We often describe autism as a lifelong neurodevelopmental disorder, but we have not known how the brain develops in autism across the life course,” says lead researcher Brittany Travers, assistant professor of kinesiology at the University of Wisconsin-Madison. “The results of this study are a step towards better understanding how the brain develops and changes in autism.”

The corpus callosum is the brain’s largest tract of white matter — so named for the pale sheath of fatty myelin that insulates nerve fibers. It was one of the first brain structures observed to be abnormal in imaging studies of people with autism 30 years ago2. Roughly one-third of individuals born without this brain structure — a condition known as agenesis of the corpus callosum — meet the diagnostic criteria for autism3.

Some studies suggest that autism affects the myelin sheath in the corpus callosum. But others have found no such evidence. Travers and her team reasoned that the discrepancies might arise from taking snapshots of the brain structure at different ages rather than looking at how it changes over time.

The researchers used a scanning technique called diffusion tensor imaging (DTI) to study the microscopic structure of the corpus callosum in 100 boys and men with autism and 56 controls over nine years. The participants ranged in age from 3 to 41 years, and each of them underwent up to four scans during the study.

By measuring the diffusion of water in the brain, DTI provides an estimate of whether white matter is intact or compromised in some way. Travers and her team found that typically developing young children appear to have lower white matter integrity in the corpus callosum than those in the autism group. But with age, their white matter gradually seems to fill out with more myelin. By contrast, children with autism apparently start out with an abundance of myelin in the corpus callosum but shed it over time.

The study suggests that white matter abnormalities manifest early in autism, says Thomas Frazier, director of Center for Autism at the Cleveland Clinic in Ohio. “It also serves as a nice demonstration that brain abnormalities in autism will become clearest and most helpful for pointing to etiology when we look at them developmentally, longitudinally, rather than at a single age,” he says.

Still, changes in the corpus callosum may help to explain why autism symptoms worsen in some individuals and improve in others, Travers says. “Is there some aspect of white matter micro-structure occurring early in the developmental pathology that locks in persistent autism across the lifespan? What are the mechanisms? Can they be unlocked?” she says. “These will be important questions for future research.”