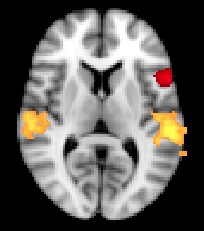 Cross talk: In the brains of people with autism, listening to speech produces abnormal connections in language regions.

Important language areas in the brain don’t show the expected patterns of connectivity when people with autism listen to speech, suggests a poster presented Monday at the Society for Neuroscience annual meeting.

Researchers analyzed functional magnetic resonance imaging scans of 14 people with autism and 14 controls, taken as they listened to a series of nonsense syllables. The test measures language segmentation, an important skill because spoken language is really an unbroken flow of syllables.

“Our brains have to be able to segment this stream of sounds into words,” explains Leonardo Moore, a graduate student in Susan Bookheimer‘s lab at the University of California, Los Angeles.

When people with autism listen to a stream of syllables, however, there’s no connection between these two major language areas of the brain.

In the controls, the connections among neurons in Broca’s area diminish as they listen to the syllables, but this modulation doesn’t occur in people with autism. “There’s a surplus of local connectivity, which jibes well with past results,” Moore says.

Other studies have found connectivity differences in the brains of people with autism during sentence comprehension1, executive function2 and language segmentation3.

The new results support the broader hypothesis that autism is characterized by impaired connections between distant regions and too many local connections4, says Marlene Behrmann, professor of psychology at Carnegie-Mellon University, who was not involved with the work.

Behrmann adds that although the study involved children between the ages of 10 and 15, it could have implications for younger children.

Behrmann and her colleagues have found that in younger siblings of children with autism, differences in resting state activity in the language areas of the brain predict which children will go on to develop autism, and their language abilities.