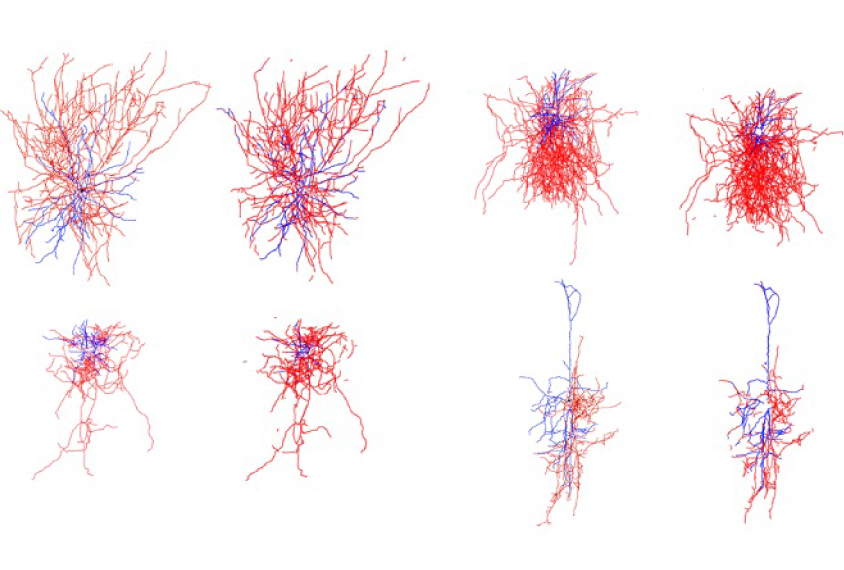 Branching out: Researchers trained a computational neural network to reconstruct the shapes of neuronal outgrowths (second and fourth columns) more quickly than manual methods can (first and third columns).

A new computational method automatically reconstructs the 3D branching shapes of neurons from images, an unpublished study demonstrates. The technique could help autism researchers make better use of a tool called Patch-seq that integrates neurons’ physical, genetic and electrical properties.

Researchers first published Patch-seq in 2016. Though powerful, the integrative technique requires scientists to manually trace neurons’ tree-like branches and projections, known as dendrites and axons — a time-intensive process that can slow down the technique’s overall use. The new method uses a neural network to reconstruct the structure, or morphology, of these “arbors” instead.

“The problem … is the morphology data collection lags far behind because of manual reconstruction,” says Olga Gliko, senior scientist at the Allen Institute for Brain Science in Seattle, who presented the new work. “This allows us to really expand this pipeline.”

Gliko and her team trained a neural network called U-Net to differentiate axons, dendrites and somas — the cell body — in raw images of neurons from mouse brain slices, and then reconstruct their neural structure in a digital file.

The process can categorize about 100 cells per day. So far, the team has reconstructed about 3,500 neurons from the mouse visual cortex. Manual tracing takes anywhere from 8 to 15 hours per cell, Gliko says, and larger and more complex neurons can take up to 40 hours.

The team also devised a way to sort cells based on the density of their arbors, which could be useful for comparing electrical and genetic data across cells.