Complications during pregnancy may contribute to autism risk 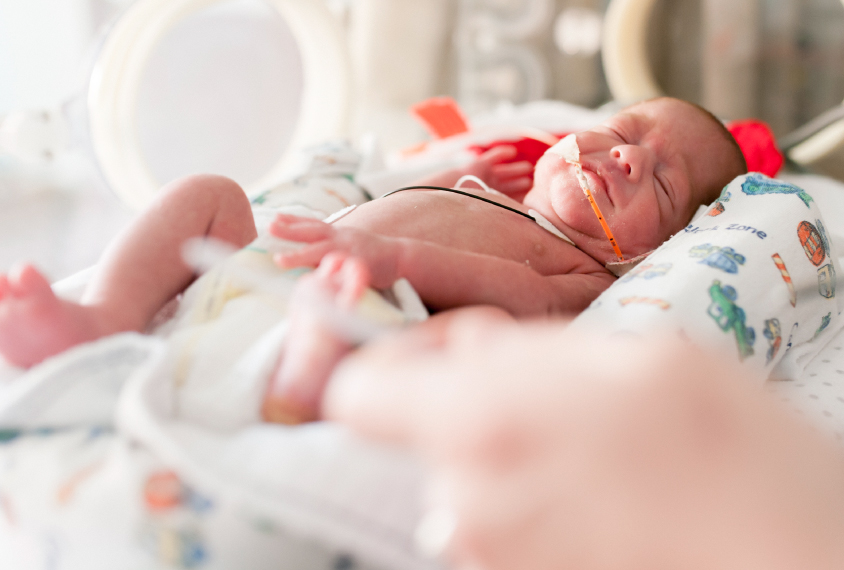 Premature puzzle: Autism rates are elevated among children born well before their due date.

High blood pressure or abnormal bleeding during pregnancy, as well as complications such as cesarean delivery or preterm birth, may all increase the risk of autism, two new studies suggest1,2. And the more difficulties during pregnancy and delivery, the more severe the autism features in the child, according to one of the studies.

The first study, published in Autism, suggests that siblings of autistic children experience many of the same complications.

“We always investigate prenatal factors in autism and controls, but we do not really look at siblings,” says lead investigator Susan Shur-Fen Gau, professor of psychiatry at National Taiwan University. The finding warrants a closer look at how an individual’s genetic profile interacts with environmental triggers to shape autism risk, she says.

The second study, in Pediatrics, found that the prevalence of autism among children born prematurely is 7 percent, compared with 1.7 percent in the general population.

Together, the studies add to mounting evidence that environmental factors, especially those in effect during pregnancy, play a significant role in autism risk.

“Outside of genetics, factors that occur during pregnancy are probably the greatest second area of influence on the etiology of autism,” says Stephen Buka, professor of epidemiology at Brown University in Providence, Rhode Island, who was not involved in either study.

Gau and her team recruited 323 autistic children with an average age of 10, and 257 of their siblings, from two medical centers in Northern Taiwan. They also included 1,504 controls, age 8 on average, from local schools and the community.

The team asked the children’s mothers whether they experienced any of 10 complications during pregnancy or delivery such as gestational diabetes, high blood pressure, abnormal bleeding and low birth weight. For about 15 percent of the mothers, the researchers were able to verify the answers with medical records.

What’s more, more children with autism had a low birth weight or underwent resuscitation, incubation or phototherapy for jaundice after birth than did controls. Rates of phototherapy showed the greatest discrepancy: 78 percent of autistic babies received it compared with 24 percent of typical ones.

The researchers also found that the more difficulties autistic children were exposed to during gestation and birth, the more severe their social communication impairments and repetitive behaviors, among other autism traits. This dose dependence suggests that these prenatal factors contribute to autism, Buka says.

However, it is unclear what that connection is, Gau says. “The specific mechanisms definitely need to be studied,” she says.

The link could be indirect: A unifying factor such as parental age or a genetic variant might increase the likelihood of both prenatal factors and autism, says Elizabeth Hisle-Gorman, assistant professor of pediatrics at Uniformed Services University of Health Sciences in Bethesda, Maryland, who was not involved in the work.

“We’re still kind of looking for that elusive factor,” she says.

The siblings of children with autism experienced most of the birth complications the researchers measured at rates similar to those in the autistic children, although the latter experienced more of these problems as a whole. The finding suggests that a genetic predisposition for autism makes some children especially vulnerable to environmental insults, Gau says.

One of the study’s weaknesses is its reliance on mothers’ memories of pregnancies that occurred more than a decade ago, Buka says. In addition, mothers with complicated pregnancies may recall more details than those with uneventful ones.

In the Pediatrics study, researchers conducted a meta-analysis to gain insight into the risk of autism from preterm birth, as previous estimates have varied widely.

The team pooled data from 18 studies of autism in children born at 25 to 31 weeks of gestation. They included only studies that relied on standard diagnostic tools, such as the Autism Diagnostic Observation Schedule.

They found a 7 percent prevalence of autism among 3,366 children. This rate is significantly higher than the rate in the general population, says Robert Joseph, assistant professor of anatomy and neurobiology at Boston University, who was not involved in the study.

Factors surrounding preterm birth, such as those Gau and her team studied, may also up autism risk, says lead investigator Shripada Rao, associate professor at the University of Western Australia Medical School in Perth.

In contrast to other reports, Rao’s study did not find an association between short gestation times or low birth weight and autism risk. Still, the studies included in his analysis vary widely in size and the age at which the children received autism diagnoses, factors that may have influenced the results.

“We need larger prospective studies, because their samples were so small and variable,” Joseph says.

Ongoing efforts such as the Environmental influences on Child Health Outcomes study, which tracks the environmental exposures of children starting before birth, may help advance this area of research.