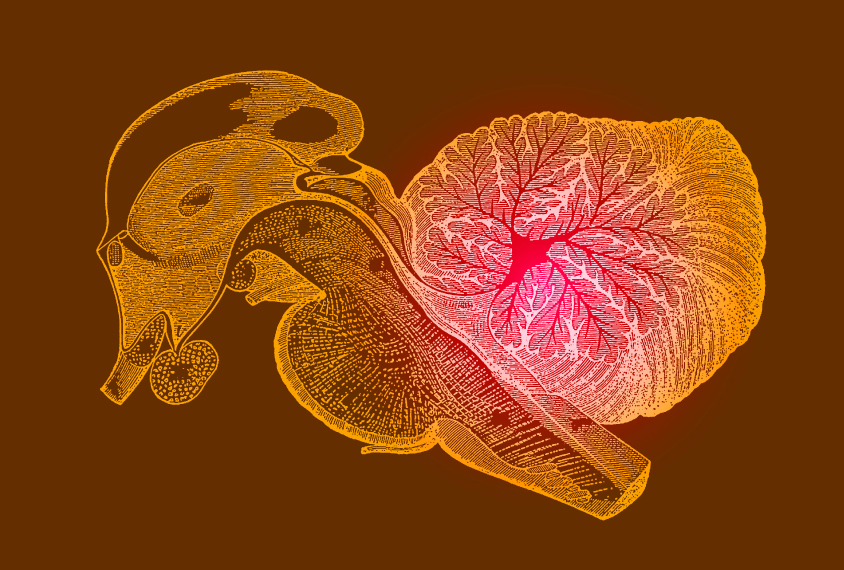 Center of action: The cerebellum, which governs movement and language, may work differently in autistic men than in autistic women.

The connections stretch from two regions within the cerebellum, which governs movement, emotion and language, to parts of the cerebral cortex. The latter regulates sensory perception and memory, among other functions.

This sex difference in brain wiring could reflect a cause of autism or a response to it; in either case, it may provide insights into the condition’s biology.

“It’s a measure of physiology and function of the brain that we hope gives us a window of what’s going on,” says co-lead researcher Stephen Gotts, staff scientist at the National Institute of Mental Health.

The findings also underscore the importance of the cerebellum in autism, experts say.

Communication between the cerebellum and the cerebral cortex may be particularly relevant to the condition, says Samuel Wang, professor of molecular biology at Princeton University, who was not involved in the study.

“[Neural] projection from neocortex to cerebellum and back is one of the dominant features of brain organization, so it would make sense to look there for clues as to the organization of autism brains,” Wang says.

Gotts and his colleagues scanned the brains of 23 autistic girls and women and 24 female controls at rest. They also scanned 56 boys and men with autism and 65 male controls. The participants were 10 to 62 years old.

The researchers measured ‘functional connectivity,’ the extent to which two brain areas are active at once — suggesting that the regions communicate with each other.

Autistic females and males both show different connectivity patterns than their typical counterparts: The girls and women show stronger connections between the cerebellum and the cortex than controls do, whereas the boys and men show weaker connections. The researchers reported these results in April in Frontiers of Human Neuroscience.

The cause of this sex difference is as yet unclear.

“It’s really hard to tell whether the sex-differential effect they observed is rooted in biology or if it’s some adaptive response from some of [the adult] autistic females,” says Meng-Chuan Lai, assistant professor of psychiatry at the University of Toronto in Canada. “This causality cannot be teased apart, and especially in this sample, because it’s a very wide age range.”

“I would have not bet on this theory, but it’s interesting the data are telling us that there is something real about it,” says Adriana DiMartino, research director of the Autism Center at the Child Mind Institute in New York City, who was not involved in the study.

The results are inconsistent with the extreme male brain theory, which posits that all autistic individuals have brains like those of typical men, Gotts says. His team plans to see whether the findings hold up even when the participants are engaged in a task.