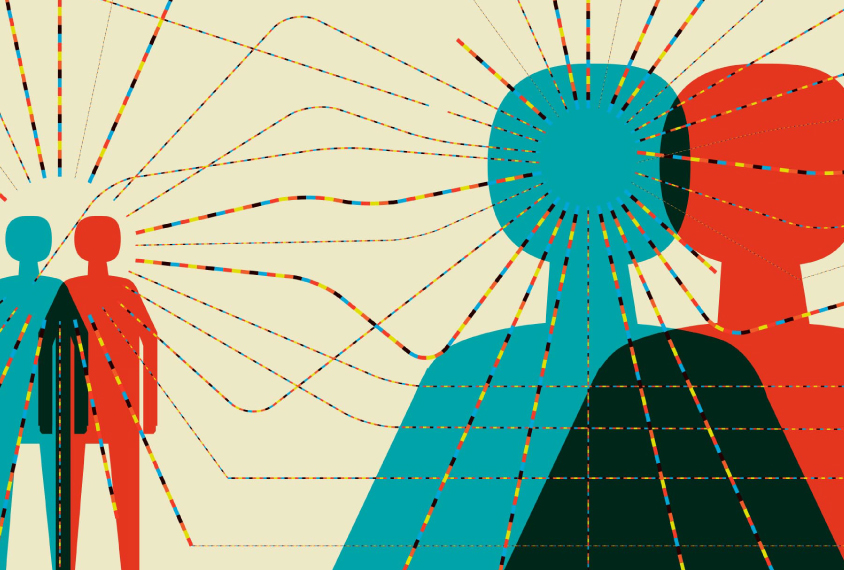 Outcome overlap: Some genetic mutations can lead to a wide variety of traits, including those associated with autism.

Genetic variants that contribute to autism may also be involved in attention deficit hyperactivity disorder (ADHD) and Tourette syndrome, according to a new study.

In 2019, researchers from the Psychiatric Genomics Consortium linked variants associated with autism to seven neuropsychiatric conditions, including anorexia, bipolar disorder and schizophrenia. Despite the genetic overlap, though, some of those conditions, such as anorexia and Tourette syndrome, don’t tend to co-occur.

The new work homes in on Tourette syndrome — a motor and tic condition — and three diagnoses that often present with it: More than half of people with Tourette also have obsessive-compulsive disorder (OCD) or ADHD, and up to 20 percent have autism. Because all four conditions can involve impulsive and compulsive behaviors, some scientists have proposed that they exist along a spectrum, with ADHD on one end, OCD on the other, and autism and Tourette in the middle.

The goal of looking at all the conditions on this spectrum together is to elucidate the genetics underlying their traits, says lead investigator Peristera Paschou, associate professor of biological sciences at Purdue University in West Lafayette, Indiana.

“There is a lot of value in zooming out and trying to think across what would be strict diagnostic categories,” Paschou says.

The researchers analyzed data from previous studies that involved a total of 93,294 people with at least one of the four conditions, along with 51,311 controls. They looked at common variants — single-letter changes to DNA that appear in more than 1 percent of the population — shared by any two of the four conditions.

Four of the six possible pairs have significant overlap; autism and OCD do not, and ADHD and OCD appear to be negatively correlated, the researchers found. Autism, ADHD and Tourette syndrome also overlapped as a group.

The researchers also identified seven regions of the genome and 18 genes that harbor variants tied to autism, ADHD and Tourette syndrome, most of which were missed in the 2019 analysis. The newly identified variants tend to occur in genes that are highly expressed in the brain, the researchers found, including in the hypothalamus and the pituitary and adrenal glands. Together these regions form a system involved in the body’s response to stress that may function differently in people with autism, ADHD or Tourette syndrome.

“This is quite intriguing to us,” Paschou says. “These genes shed some further light into what causes these neurodevelopmental phenotypes.”

The work was published earlier this month in Biological Psychiatry.

The lack of overlap between autism and OCD is surprising, says Thomas Fernandez, associate professor of psychiatry at Yale University, who was not involved in the work. The two conditions sometimes co-occur, and spontaneous mutations linked to OCD often appear in genes associated with Tourette syndrome and autism, including CHD8, Fernandez found last year.

It’s possible the overlap between autism and OCD lies more in rare variants — the target of Fernandez’s study — than in the common ones examined in the new work, he says.

Overall, though, the new study confirms clinical observations of how the four conditions present, he says. “I would be scratching my head if I did not see these correlations.”

It also demonstrates the power of analyzing groups of people with overlapping conditions to identify the underlying genetics. Studies of more varied groups tend to require sample sizes in the hundreds of thousands to detect any associations.

“It’s actually an ingenious way to do it,” Fernandez says. “It’s not always about larger numbers. It needs to be combined with more deliberative, thoughtful clinical characterization.”

The study is “very powerful,” says Tinca J.C. Polderman, associate professor of child and adolescent psychiatry at Amsterdam UMC in the Netherlands, who was not involved in the work. A better understanding of which genes and pathways contribute to each condition may ultimately point to new treatment targets, she says.

“Having more insight in the causes will hopefully contribute to better care,” Polderman says.