Colombian cluster of fragile X may reveal insights into ‘premutation’ 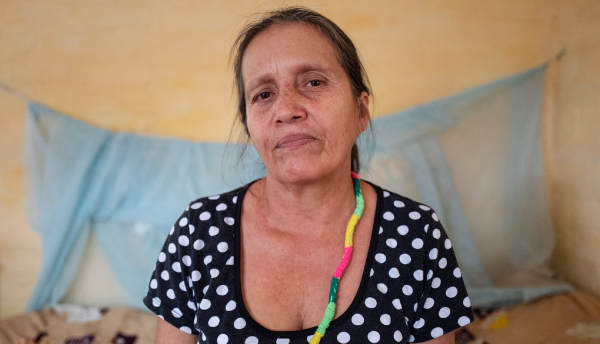 Carrier effect: Nidia Quintero is one of 25 people with a fragile X premutation in Ricaurte, Colombia.

Nidia Quintero’s cheeks and outstretched hands quiver incessantly. For the past few years, her husband has poured her morning coffee to keep her from spilling it. Her medical history is dotted with other serious symptoms. As a child, she had frequent seizures and headaches. At age 35, she had her uterus removed after several miscarriages.

Quintero, now in her mid-50s, is a member of a large extended family that comprises the world’s largest cluster of people with mutations that cause fragile X syndrome. This rare genetic condition is often accompanied by intellectual disability, seizures and autism1.

People like Quintero who carry so-called ‘premutations’ — milder mutations in the fragile X gene — rarely have features of fragile X syndrome, but they do often have other conditions. For instance, some women with a premutation have a condition called fragile-X-associated primary ovarian insufficiency (FXPOI), which can cause infertility and features similar to menopause before age 402. Carriers also may develop psychiatric conditions, such as depression3. And some over age 50, including Quintero, develop fragile X-associated tremor ataxia syndrome (FXTAS).

“We have two theories. One is [they have] another gene that produces a special effect to increase the seizures,” says lead researcher Wilmar Saldarriaga-Gil, professor of medical genetics at Universidad del Valle in Cali, Colombia. “The second is environmental factors.”

The researchers have little evidence for either theory, but both sound plausible, other experts say.

“I would be concerned that there’s some other gene in the population isolate that makes it more likely for them to have seizures,” says Elizabeth Berry-Kravis, professor of pediatrics at Rush University in Chicago, who was not involved in the research.

Fragile X syndrome is characterized by more than 200 repeats of CGG nucleotides in the FMR1 gene. People with a premutation harbor 55 to 200 repeats.

Saldarriaga-Gil and his colleagues visited the homes of 20 female and 5 male premutation carriers in 2016. They reviewed the participants’ medical records and used standardized scales to assess their clinical features. One of the males is an infant and was excluded from the analysis.

Of the 12 women aged 50 or older, 4 have either tremor or ataxia — trouble with balance and coordination. Only about 16 percent of women with the premutation elsewhere have both tremor and ataxia.

Of the 16 women older than age 40 with the premutation, 3 meet criteria for the ovarian syndrome. This rate is similar to that of premutation carriers in the general population. However, another four women in Ricaurte have had associated features, such as abnormal vaginal bleeding or reproductive problems, the researchers say. The findings appeared in the International Journal of Developmental Neuroscience in October.

Together, the findings suggest that conditions commonly associated with fragile X crop up with unusually high frequency in Ricaurte.

Other genes or exposure to environmental toxins may explain why this is so. (Many people in Ricaurte with the premutation spend years working in fruit fields laden with pesticides.)

“There could be an additive effect,” says Randi Hagerman, medical director of the MIND Institute at the University of California, Davis and a researcher on the study.

However, proving a link between pesticide exposure and premutation features is likely to be difficult.

“It’s just a complex research question, in part because there usually aren’t good records of exposures,” says Jim Grigsby, professor of psychology and medicine at the University of Colorado Denver, who was not involved in the research.

The team is sequencing the protein-coding DNA regions of the premutation carriers, which may reveal whether they have mutations in genes associated with seizures.