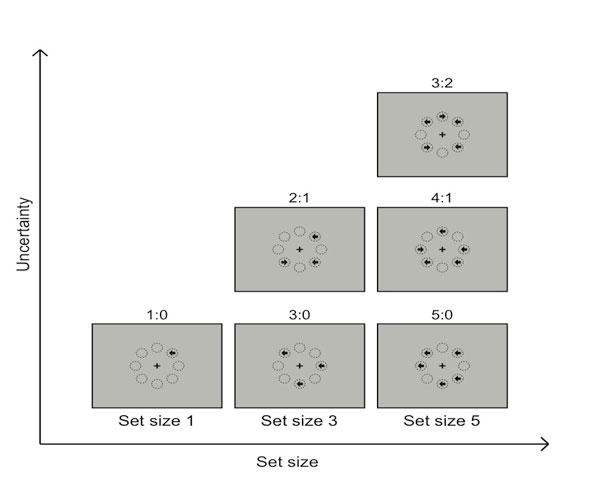 Click to enlarge image Directional dilemma: People with autism have trouble determining the direction of a set of arrows.

A new test demonstrates how people who have autism struggle with flexible thinking, according to a poster presented Wednesday at the Society for Neuroscience annual meeting in New Orleans.

The study also suggests that the analysis of results from these sorts of tests matters as much as the test’s design.

Flexible thinking is one aspect of cognitive control, the ability to develop and maintain goals and modify one’s responses in order to meet those goals. People who have autism struggle with these abilities.

Studies of cognitive control don’t always pick up the problems people with autism have, however. “Many different tasks have been used and the results have been really inconsistent,” says Melissa-Ann Mackie, a graduate student in the laboratory of Jin Fan, at Queens College, the City University of New York, who presented the work.

In the new test, known as the Majority Function Task, a series of computer screens show one, three or five arrows arranged around a central point. For each screen, participants must indicate whether the majority of the arrows point to the right or the left.

By changing the number of arrows on the screen and how evenly they are divided into right- and left-pointing groups, the researchers created six different versions of the test that vary in difficulty. It’s easier to see that the majority of arrows point left when there are three arrows than when there are five, for example.

“You have to be flexible in order to solve the problem,” rapidly shifting mental strategies depending on how many arrows pop up on the screen, says Fan.

The researchers tested 16 men with autism and 16 controls, and found that those with autism are consistently less efficient at identifying the direction of the arrows.

Efficiency takes into account both how quickly and how accurately the participants accomplish the task. Most studies evaluate either speed or accuracy, but those individual measures don’t account for how people actually behave during such tests, the researchers say.

A participant might sometimes try to choose an answer as fast as possible, for example, and at other times as accurately as possible. He might also switch strategies in the middle of the test. This may help explain the inconsistent findings from previous studies.

In the new study, the researchers found that analyzing speed alone gave different results than analyzing accuracy alone. Combining both showed that those with autism do worse than controls on all but the most difficult version of the test. Both groups do poorly on the most difficult test.

Some researchers have suggested that people with autism only have deficits in cognitive control during difficult tasks. “But here, when we look at efficiency, we see these deficits from the easiest level,” says Mackie.

Difficulties with cognitive flexibility may play a role not just in the repetitive behaviors characteristic of autism, but also in language impairment. In order to understand and contribute to a conversation, “you need that high-level flexibility,” Fan says. “Language is very uncertain.”