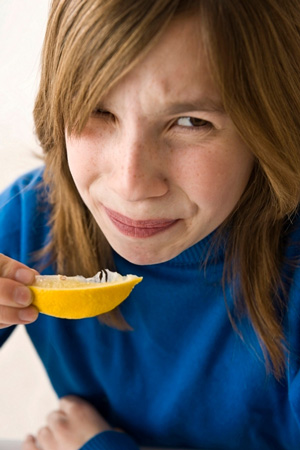 Intense sense: Some people with autism may overreact to certain sensory stimuli, such as the sour taste of a lemon.

A new questionnaire described 24 April in Molecular Autism may help assess sensory problems — such as heightened awareness of bright colors or loud noises — in adults with autism1.

Under- or oversensitivity to sounds, textures, lights or patterns is common in people with autism. The newest edition of the Diagnostic and Statistical Manual of Mental Disorders includes abnormal sensitivity as a core feature of autism.

Being overly sensitive to stimuli may cause some people with autism to withdraw from social situations. Whether this ‘intense world theory’ fits all individuals with autism or only a subset is still under debate.

Most studies of sensory sensitivity in autism have relied on parent reports, but because sensory experiences are subjective, researchers must investigate what people with autism themselves say about what they feel.

In the new study, researchers tested a questionnaire designed to capture sensory sensitivity. They asked 196 adults with autism and 163 controls to answer 92 questions about their abilities to taste, smell, hear, touch and see. The participants marked how much they agreed or disagreed with statements involving undersensitivity — “I wouldn’t notice a 10-degree difference in temperature of the weather” — or oversensitivity, such as, “I would be able to see the individual blades in a rotating fan even if it was at maximum speed.”

The scores indicated that, overall, people with autism are more sensitive than controls to vision, hearing, touch and taste, but not to smell.

The researchers used another test to measure autism traits in both groups. They found that people who score higher on this test are also more likely to be oversensitive than those with lower scores. What’s more, women in both groups reported greater sensitivity than the male participants. The researchers suggest that this gender-based difference deserves attention, particularly because many studies on autism focus on men and mounting evidence indicates that autism looks different in women.