Cognition and behavior: Sticky gaze may be early autism sign 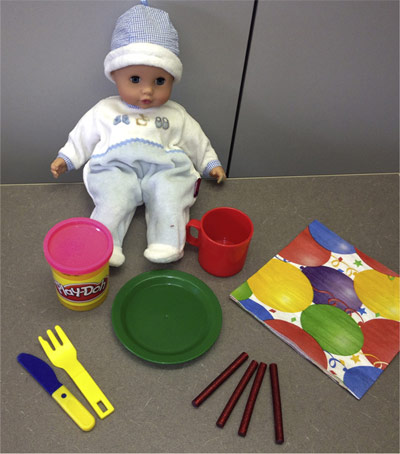 Make believe: To encourage children to grasp objects, researchers make a birthday cake out of Play-Doh and tell the children that a baby doll is hungry.

Babies later diagnosed with autism tend to stare at objects after picking them up at much later ages than controls do, according to a study published in Behavioral Brain Research1.

This delay may contribute to problems with joint attention — the tendency to seek out and follow others’ gaze — in autism, the researchers say.

Babies who pick up an object continue to look at it for about a second afterwards, a behavior researchers call ‘sticky attention.’ At 1 year of age, however, they tend to look away as they touch the object, or immediately before. This may allow them to switch their focus to another object or person in the room.

Studies have shown that babies later diagnosed with autism still show sticky attention at about 12 months of age2. The new study follows the development of sticky attention over time in babies at risk for autism and controls.

The researchers looked at 10 typical babies and 20 baby siblings of children with autism, half of whom were later diagnosed with the disorder. They observed the children every three months from 6 to 18 months of age, and then again at 24 and 36 months of age. They evaluated the children for autism diagnoses at 36 months, using the Autism Diagnostic Observation Schedule and the Autism Diagnostic Interview-Revised, two well-established diagnostic tests.

Children with autism and controls both show sticky attention at 6 months of age. In controls, this drops from 80 percent of the time at 6 months to about 22 percent at 12 months and not at all by 24 months of age.

By 36 months, however, they switch their focus almost as often as typically developing children do.

This may be because by this age, children tend to pick up the objects with more practical intention, the researchers say. They are also more accustomed to the objects, and so may be less caught up in the sensations they evoke.

The findings provide an early indicator of autism seen before the age of diagnosis. They also suggest a difference in attention that may get in the way of social interactions during a crucial developmental time period, the researchers suggest.