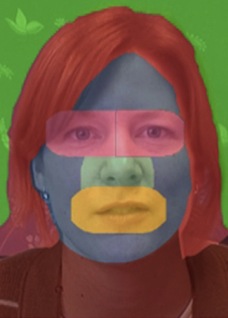 Painted face: Infants later diagnosed with autism do not tune in to the same features of a talking woman as controls do (shown here).

Infants later diagnosed with autism tend to look at the hair and body of someone speaking to them instead of at the eyes and mouth, which convey social cues, reports a study published 13 August in Biological Psychiatry1.

Studies suggest that children and adults with autism look less at people’s eyes and faces than their typically developing peers do. This may cause them to miss the signals that would help them understand social and emotional nuances.

The new study reports that children with autism look at faces differently from their peers as early as 6 months of age. This disparity may serve as an early indicator of autism and suggest behavioral targets for interventions.

The researchers used an eye-tracking system to follow the gaze of 57 siblings of children with autism, known as baby sibs, and 42 controls. Baby sibs have a 20-fold higher risk of autism than the general population. The babies all watched a still image of a woman’s face, a video of a smiling woman’s face and a segment of a woman reciting a nursery rhyme.

At 2 to 3 years of age, 12 of the 99 children, including 1 of the controls, were diagnosed with autism, 29 had developmental delays and 58 were developing typically.

Both groups looked more at the woman’s eyes than at other features in the still image and more at her mouth during the video. This suggests that the children in the autism group were able to switch their attention from the eyes to the mouth as appropriate.

Overall, however, the babies later diagnosed with autism looked less at the faces compared with those who developed typically. During the nursery rhyme video, babies in the autism group tended to avoid the woman’s eyes, mouth and nose. Instead, they looked at regions such as her hair and bodythat provide few social clues.

All of the videos have background music, which helps attract the infants’ attention. It’s possible that the music distracted the infants in the autism group from the woman reciting the nursery rhyme, the researchers say. Many real-life situations are also over-stimulating to those with autism and may affect these infants’ attention to facial features.