Cognition and behavior: Some neurons attuned to whole faces 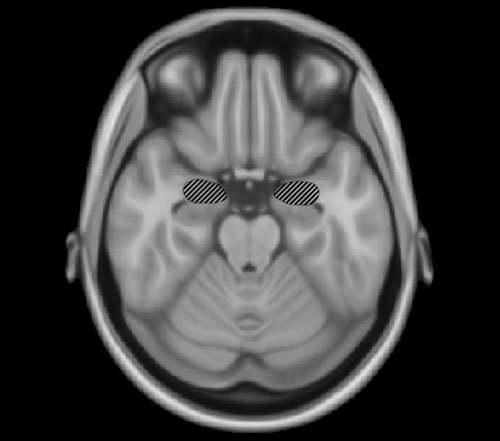 About face: The amygdala processes facial expressions, and defects in this ability are characteristic of some individuals with autism.

About face: The amygdala processes facial expressions, and defects in this ability are characteristic of some individuals with autism.

A subset of neurons in the amygdala, a small brain region responsible for processing emotions, recognize whole faces rather than individual features, according to a study published 11 October in Current Biology1.

The results could help researchers understand how the brain processes faces. Studies suggest that deficits in this ability are characteristic of some individuals with autism. There is some evidence that people with autism avoid looking at others’ eyes and show different patterns of brain activity when looking at faces than controls do.

The amygdala has also been associated with autism, although lesions in the amygdala alone do not lead to the disorder, according to one study.

In the new study, Ralph Adolphs and his colleagues at the California Institute of Technology looked at neurons in the amygdalae of ten individuals who had electrodes implanted to locate the site of epileptic seizures.

The researchers measured the activity of 185 neurons in the amygdalae of seven of the individuals as they looked at pictures of faces that were either intact, scrambled or had only portions of the face — such as the eyes, the mouth or other regions — visible.

About half the measured neurons fire when individuals see intact faces or portions, whereas only 10 percent are active when looking at scrambled images, the study found.

However, 36 of the 185 neurons fire only when individuals see intact faces, but not individual features. The researchers dub these neurons ‘whole-face-selective’ and estimate that about 20 percent of neurons in the entire amygdala are selective for whole faces.