Cognition and behavior: Slow response to faces seen in TSC 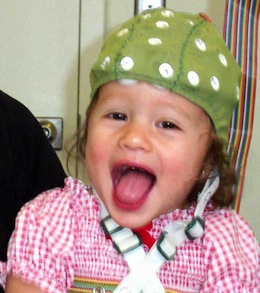 Looking later: Children with tuberous sclerosis complex have deficits in face processing that are similar to those found in children with autism.

Children with the autism-related disorder tuberous sclerosis complex (TSC) show sluggish brain activity in response to images of faces, according to a study published 8 November in the Journal of Child Neurology1.

TSC is a rare disorder caused by a mutation in either the TSC1 or TSC2 gene. Individuals with the disorder often have epilepsy, intellectual disability and benign tumors called tubers in their brains and elsewhere in the body. About half also have autism.

Many studies have found problems with face processing in people with autism, including in recognizing faces and emotions. This is the first such study in children with TSC.

In the new study, researchers used electroencephalography (EEG) to measure brain activity in 19 children under age 4 with TSC, and 20 controls. EEG is a non-invasive technique that detects electrical signals emitted by neurons.

EEG studies in children with the disorder can be challenging because their epilepsy may trigger abnormal background electrical activity in the brain. Still, the researchers were able to separate out brain activity related to specific stimuli, called event-related potentials.

When a typical child views an image of a person’s face on a screen, his or her brain responds with a pattern of activity that is characteristic of face processing. This response, called the N290, is delayed in children with TSC compared with controls, the study found.

However, another response, called P1, which represents the brain’s early response to any visual stimulus, is the same in both sets of children.

The results suggest that children with TSC have difficulties with face processing, but not in responding to visual information generally.

The N290 response may be even more delayed in children who have both TSC and autism compared with those who have TSC alone. Children who have tubers in the temporal lobe, a brain region that responds to faces, also tend to have greater N290 delays than those who don’t have tumors in this region.

However, both of these comparisons fell short of statistical significance, which may be a consequence of the study’s small sample size. The researchers are following up with a larger study of at least 60 young children with TSC.