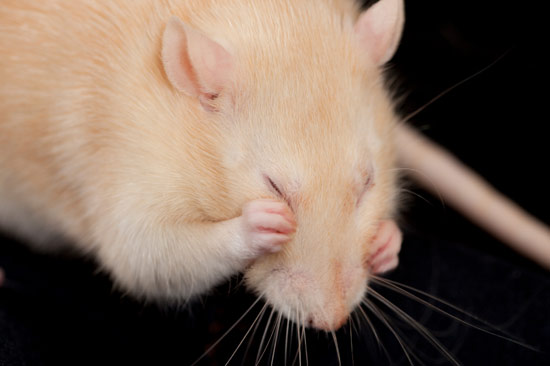 Scratch that: Mice lacking ITGB3, an autism-associated gene, react to new surroundings by grooming themselves repetitively.

Mice that lack the gene for integrin β3, or ITGB3 — which regulates the levels of serotonin in the blood — groom themselves frequently and show less interest in stranger mice compared with controls, according to a study published in February in Autism Research as part of a special issue on mouse models in autism.

Lower-than-normal levels of the neurotransmitter serotonin have been linked to several psychological disorders, most notably depression. About 30 percent of people with autism show higher levels of serotonin in the blood compared with controls, suggesting that serotonin levels could serve as a biomarker for the disorder.

Mutations in ITGB3 are associated with autism and with changes in blood levels of serotonin, suggesting that this gene could be a link between the two. In the new study, mice missing one or both copies of ITGB3 show changes in two of the three core categories of autism symptoms — repetitive behavior and social interactions.

Unlike control mice, the mutant mice do not show a preference for a new mouse over one they are used to. They are still able to distinguish between different smells, however, suggesting that they can tell the two mice apart.

Mutations in the receptor for oxytocin — a hormone linked to autism and believed to be important for social interaction — can have the same effect.

Mice lacking ITGB3 also groom themselves more when placed in a new cage, but not in their home cage. This is probably not the result of increased anxiety in general, as these mice are just as likely as controls are to enter elevated platforms and roam in an open space.

The results are complicated by the fact that the mice have other symptoms, including problems with blood clotting. Lower levels of ITGB3 are also likely to lead to less serotonin in the blood, not more, contrary to what is seen in autism. However, the results suggest that ITGB3 affects social behavior, which reinforces its potential role in autism.