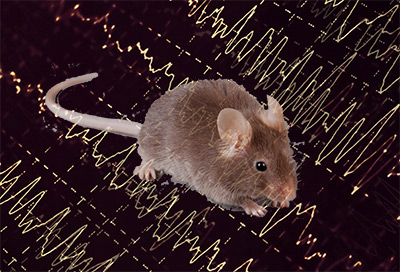 Electrical effects: Mice with early-life seizures — electrical storms in the brain — have trouble learning to find an underwater platform.

Inducing seizures in young mice leads them to show autism-like social deficits, as well as problems with learning and memory,according to a paper published 29 March in Experimental Neurology1.

It was unclear whether seizures induce autism symptoms or whether autism and seizures simply share underlying causes.In mice, seizures are known to lead to problems with learning and memory, but had not been linked to social deficits and repetitive behaviors.

The new study sought to explore the effects of inducing multiple seizures a day for five days in healthy mice. The researchers exposed the mice to a seizure-inducing chemical called flurothyl three times a day, starting when they were 7 days old.

The researchers found that unlike controls, male mice that had seizures do not show a preference for interacting with an unfamiliar mouse over a familiar one. (They did not use females for this experiment.)

They also placed mice in a box with wire-mesh cylinders at each end and assessed the mice’s interest in an unfamiliar mouse in one cylinder versus a similarly sized Lego in the other. The mice that had seizures show far less interest in the other mouse than the control mice do.

The researchers plan to investigate whether seizures exacerbate the symptoms in mouse models of fragile X syndrome and other neurodevelopmental disorders.They also plan to test the effects of inducing longer seizures, rather than multiple short ones.