Cognition and behavior: Response to faces delayed in autism 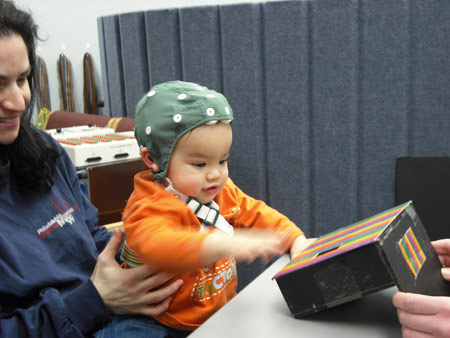 Signal cap: A non-invasive imaging measurement shows that children with autism have a brain response to faces that is typical of younger controls.

Signal cap: A non-invasive imaging measurement shows that children with autism have a brain response to faces that is typical of younger controls.

A brain response that discriminates familiar faces from unfamiliar ones develops more slowly in children with autism than in controls, according to a study published in the November/December issue of Child Development1.

Several studies have reported abnormalities in how children with autism respond to faces, such as looking preferentially at the mouth region instead of at the eyes.

Some groups rely on electroencephalography, or EEG, a non-invasive imaging measure that detects electrical activity, to assess a child’s response to faces. Peaks or dips in an EEG indicate large numbers of neurons working together and can occur at defined times — for example, after an individual has just seen a stimulus such as a face — and are called event-related potentials (ERPs).

In the new study, researchers investigated an ERP called the Nc, which is a measure of attention, to assess the response of children with autism to different faces. The researchers looked at 16 children with autism, ranging in age from 18 to 30 months, compared with 17 typical children in the same age range. They also compared the autism group with 15 younger controls, ranging from 12 to 17 months of age.

The children with autism and the younger controls both have a stronger Nc response to familiar faces than to unfamiliar ones. By contrast, the older controls show no preference, responding similarly to both familiar and unfamiliar faces, the study found.

In another study published in April, a different group of researchers found that 12-month-old infant siblings of children with autism, who are at higher risk for developing autism than are typical infants, also respond more strongly to familiar faces than to unfamiliar ones compared with controls of the same age2.

Although the two studies investigated different risk groups at different ages, together they suggest that autism is associated with a delay in face processing.

In the new study, the researchers followed up with 12 of the children with autism one year later, at 32 to 47 months of age. The children show no difference in their response to familiar and unfamiliar faces at this age, the study found, suggesting that their brain response catches up to that of controls.

Children with autism are also less likely to prefer familiar faces over unfamiliar ones if they have good social skills as measured by the parent-reported Vineland Adaptive Behavior Scales, the study found. This suggests that response to faces depends on children’s ‘social age’ rather than their actual age, the researchers say.