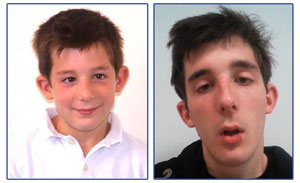 Time course: The boy pictured above has deletions in the SHANK3 gene and went from speaking relatively normally to saying only ”yes” or ”no” as he grew older.

Characteristic symptoms of Phelan-McDermid syndrome — a disorder caused by the loss of the 22q13.3 chromosomal region — may include bipolar disorder and a sudden loss of skills during adulthood, according a study published in June in Molecular Syndromology1.

In particular, the loss of SHANK3, one gene in the 22q13.3 region, may be responsible for these symptoms, suggests a case study published 4 August in the European Journal of Medical Genetics2.

Phelan-McDermid syndrome is characterized by intellectual disability, unusual physical features, problems with language and other symptoms of autism. The syndrome is rare, however, and not yet fully understood. At a conference in July, for example, researchers presented several examples of adults with the syndrome who had experienced sudden regression.

In the first new study, researchers described the symptoms of seven individuals, aged 5 to 51 years, with Phelan-McDermid syndrome. Three of these individuals underwent dramatic regression as adults.

One woman was hospitalized as a result of a suspected prescription drug overdose. Following this, she could no longer speak or recognize anyone, including her mother. The second individual lost skills twice during his lifetime. At 27, following severe manic behavior, he lost the ability to walk and to eat independently. After a septic infection at age 40, he lost even more skills, including language and continence. The third individual became bedridden after a prolonged seizure.

This is supported by the case study, which describes an 18-year-old man who has SHANK3 deletions and bipolar disorder. His language ability has gradually regressed over his lifetime and he lost bladder control at age 17.