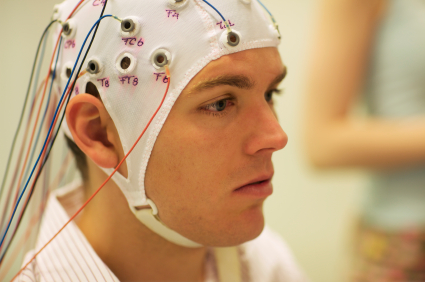 Social signals: Brain scans can detect rhythms that indicate whether people relate to the actions of others.

Oxytocin may activate the mirror neuron system — a group of neurons that is active when people empathize with others — according to a paper published in the November Psychoneuroendocrinology.

Oxytocin is a hormone that enhances feelings of love and trust, and variations in the oxytocin receptor are linked with a higher risk of autism. Sniffing small doses of oxytocin has also been shown to increase trust and eye contact in people with autism, and emotional empathy in men with social impairment.

Researchers have also suggested that defects in mirror neurons, which are activated when one observes others’ actions, could underlie the social behavior deficits in autism.

The new study shows for the first time that there is a connection between oxytocin and the mirror neuron system. This “strengthens the notion that oxytocin is a potential therapeutic agent in autism,” says lead author Richard Ebstein, professor of psychology at the National University of Singapore.

Ebstein’s team used electroencephalography — a non-invasive technique to monitor brain rhythms — to look at suppression of the mu pathway, which is believed to represent activity of the mirror neuron system.

Mirror neurons are activated when individuals watch other people, but not objects, moving. Some studies have shown that people are typically more sensitive to biological motion than to the movement of objects. The new study suggests that oxytocin may be responsible for enhancing these differences in perception.

People with autism are less sensitive to human motion compared with typical controls, suggesting that oxytocin could have a therapeutic benefit for those with the disorder.