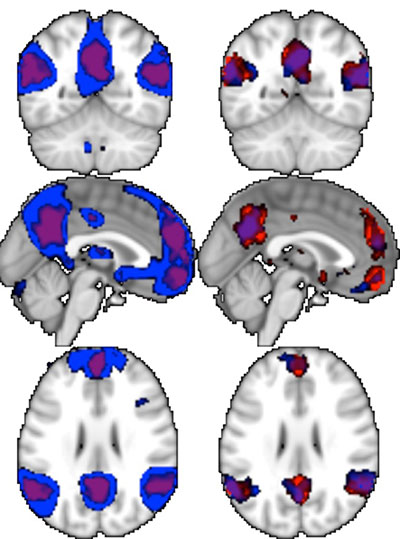 Similar signatures: The brain areas activated during a theory of mind task in people with autism (red) and those without (blue) largely overlap (purple), showing few significant differences.

When people with autism consider scenarios that require them to infer others’ thoughts and beliefs, scans show no difference between their brain activation and that of controls, according to a study published 20 September in PLoS One1.

The new study looked at functional magnetic resonance imaging scans from 31 high-functioning adults with autism and 462 controls, taken as they completeda theory of mind test known as a false-belief task. The brain scans were gathered during several other studies spanning eight years.

Each participant read and listened to a series of different vignettes. Half were ‘false-belief’ scenarios, in which someone in the story held a mistaken belief about something. The other half were ‘false-photo’ scenarios, about a photo, map or other visual representation that was no longer accurate. Interpreting ‘false-belief’ scenarios requires theory of mind, whereas interpreting ‘false-photo’ scenarios does not.

The researchers isolated brain activity patterns that occurred only when people were considering ‘false-belief’ scenarios. They found the two groups show no significant difference in brain activity, even in the temporoparietal junction and parts of the medial prefrontal cortex, brain regions associated with theory of mind.

This suggests that people with autism don’t use a different neural system to complete theory of mind tasks than controls do, the researchers say.

Studies that have found differences in brain activation in people with autism during theory of mind tasks were smaller than the new study, and the scenarios they asked participants to evaluate were subtler, involving irony and moral reasoning rather than simple false beliefs.