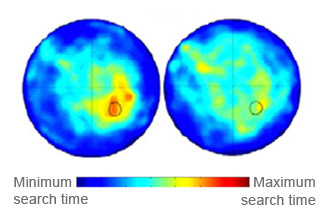 Escape route: Mice lacking one copy of neurobeachin (right) forget the location of an exit ramp in a water bath and spend less time swimming there than controls (left) do.

Mice missing one copy of neurobeachin (NBEA), an autism-linked gene that fine-tunes signals at neuronal junctions, show autism-like behaviors, according to a study set to be published in the March issue of Neurobiology of Disease1.

Researchers have found deletions in one copy of NBEA in a handful of individuals with autism. In mice lacking NBEA, a transport defect prevents signaling proteins from reaching synapses, the junctions that relay signals between neurons.

In the new study, researchers looked at mice with only one functioning copy of NBEA. Unlike controls, these mice prefer an empty chamber to one that contains another mouse, reminiscent of the social deficits seen in autism.

What’s more, in response to a squirt of water on their snouts, the mutant mice groom more than controls do, which is suggestive of repetitive behavior associated with the disorder.

The mutant mice may have learning and memory problems, taking longer than controls to find the location of an exit platform in a tub of water. They are also extra jumpy when they hear noises that they’ve learned to associate with a shock.

In mice lacking one copy of NBEA, a process that bolsters the strength of active synapses is enhanced in the hippocampus, a brain region involved in learning and memory.

Researchers have seen a similar effect in mice in which CREB — a protein involved in learning and memory — is always active. Normally, the addition of a chemical phosphate activates CREB, and phosphate removal turns it off.

More CREB is phosphorylated in cultured cells that have dampened NBEA levels than in controls, the study found.