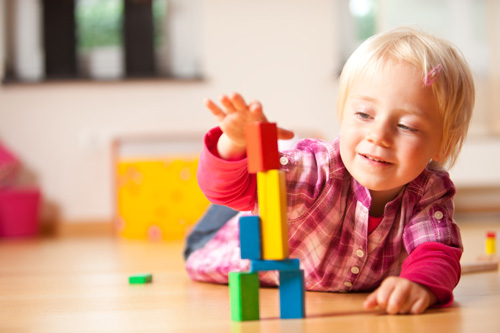 Defective dexterity: Toddlers with autism have trouble with activities that involve fine motor skills, such as playing with building blocks.

The severity of core autism symptoms in young children goes hand in hand with the degree of the children’s difficulty with motor tasks, according to a study published in the April issue of the Adapted Physical Activity Quarterly1.

Motor skill development is known to be delayed in children with autism.Previous work has shown that the level of motor deficits at 6 to 15 years of age is related to the severity of core autism symptoms2.

The new study sought to quantify this relationship at an even younger age. It looked at 110 children with autism, 26 children with pervasive development disorder-not otherwise specified and 23 controls,all between 14 and 33 months of age.

The researchers assessed gross motor skills by asking the children to make big movements such as standing, jumping or sitting down. They also evaluated fine motor skills with such tasks as manipulating building blocks or coloring.Finally, they assessed severity using the calibrated severity score, a measure that evaluates restricted or repetitive behaviors and social and communicative difficulties independent of age or language ability.

They found that the more severe a child’s symptoms, the more delay he shows in both his gross and fine motor skills.