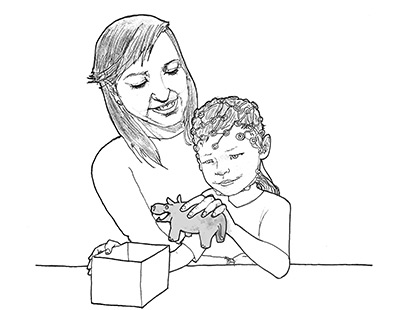 Mirror neurons, which fire when a person performs or observes an action, function just as well in young children with autism as they do in their typically developing peers, reports a study published 10 February in Autism Research1. The findings boost evidence against the theory that impaired mirror neurons explain autism’s social deficits.

Researchers first discovered mirror neurons in the brains of rhesus macaques in 2004. Impaired mirror neurons were long thought to underlie empathy and mimicry deficits in people with autism. However, subsequent studies have poked holes in the so-called ‘broken mirror hypothesis.’

One tool used to study mirror neurons is electroencephalography (EEG), a noninvasive technique that measures brain activity by mapping electrical changes across the scalp. EEG detects large groups of neurons working together and can record a brain wave called mu, which has been linked to mirror neuron activity2.

Imitation skills and mirror neuron function might improve as children gain more experience with social interactions3, which may be particularly relevant for children with autism. The new study recorded mu suppression in toddlers, who are young enough to show innate rather than socialized differences.

The researchers recruited 18 children with autism and 19 controls, all between 2 and 4 years of age. Each child watched an experimenter move two toys toward a box and place them inside. The experimenter then directed the child to do the same.

During the observation and imitation tasks, both groups showed similarly strong mu suppression, which indicates activation of mirror neurons. The children with autism were just as adept at imitation and showed no difference in mu suppression from controls.

However, the study does not rule out the possibility that severe autism cases might involve mirror neuron impairment because it excluded children with autism who also show severe developmental delay. The researchers also did not ask whether children had previously participated in treatments that might improve imitation skills, a potential confounding factor.

Still, the findings bolster previous suggestions that impaired mirror neuron functioning is unlikely to be responsible for autism’s social impairments.