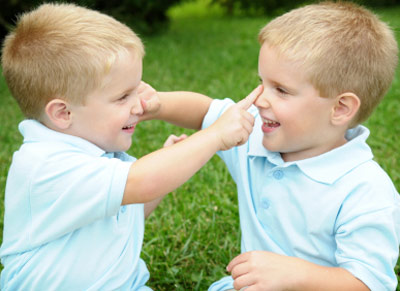 Simon says: Neurons that appear to play a role in helping us understand another person’s actions may be involved in autism.

Age-related changes to the mirror neuron system — a pathway thought to be involved in empathy — are no different in individuals with autism compared with controls, according to a meta-analysis published 1 February in Social Cognitive and Affective Neuroscience1. The results challenge previous reports that suggest deficits in the mirror neuron system diminish with age in individuals with autism.

Researchers first discovered mirror neurons when they saw that a group of neurons in rhesus macaques are active both when the monkeys watch another monkey perform an action and when they do it themselves. These neurons appear to play a role in understanding another’s actions, a function that is similar to ‘theory of mind,’ which is impaired in individuals with autism. Because of this, researchers have speculated that dysfunction in a similar system in humans might underlie autism.

Studies have shown that a signal of brain activity called mu is suppressed both when people observe and perform actions. Researchers measure mu suppression with electroencephalography (EEG), a brain imaging technique that can detect the activity of large groups of neurons working together, and use it as an indicator of the function of the mirror neuron pathway.

The new meta-analysis examines the evidence for age-related changes in mu suppression by compiling data from four studies that together looked at 66 individuals with autism and 51 controls ranging from 6 to 17 years of age.

Measurements were taken during a control condition in which the participants were either at rest or watching a mechanical action, and while they were watching a person open and close his or her hand. Three of the studies also looked at mu suppression while the participants repeated the task themselves.

However, mirror neuron activity improved with age at the same rate in both the autism and control groups, with no statistically significant difference between the two.

This suggests that changes in mirror neuron activity are part of normal development and are not related to a specific dysfunction in autism, the researchers say. Research on more homogenous groups of participants is needed to fully understand the role of mirror neurons in autism, they conclude.