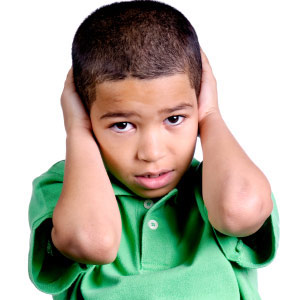 White noise: Children with autism who are hypersensitive to sound may have more severe behavioral problems than controls do.

White noise: Children with autism who are hypersensitive to sound may have more severe behavioral problems than controls do.

Brain imaging can detect acute sensitivity to sound in people with autism, according to a study published 25 January in Neurophysiology1.

The results suggest that sound sensitivity originates in the auditory cortex, a brain region responsible for sound perception.

In addition to the core features of autism — deficits in social skills, language impairments, and repetitive and restrictive behaviors — many people with the disorder have acute sensitivity to sensory stimuli, such as loud noises or bright lights. Because a fear of crowded, noisy spaces can lead to social isolation and calming stereotyped behaviors, these sensitivities might even underlie the core deficits of autism, some researchers say.

Despite its potential importance for tailoring interventions for children with the disorder, however, sensory sensitivity is understudied in autism.

In the new study, researchers used magnetoencephalography (MEG) — a non-invasive brain-imaging technique that can capture large groups of neurons working together — to investigate sound sensitivity in 18 boys with autism and 12 age-matched controls. MEG detects a neural response to sound both 50 and 100 milliseconds after a stimulus, called the M50 and the M100, primarily in the auditory cortex, an indicator of auditory perception.

Of the 18 participants with autism, 9 have acute sensitivity to sound as measured by the Sensory Profile, a parent questionnaire that gauges sensory sensitivity.

The results of the questionnaire also showed that individuals with autism who do not score above a hypersensitivity cutoff are still more sensitive to sound than are controls.

The researchers also observed differences in their MEGs. The children with autism and hypersensitivity have delayed M50 and M100 responses after hearing a noise transmitted directly into their ear canal compared with children with autism but no hypersensitivity. The latter group also has a delayed response compared with controls, however. The results suggest that delays in the M50 and M100 responses correlate with the severity of an individual’s sensitivity to sound, the researchers say.

Children with heightened sound sensitivity and autism also have greater ‘dipole moments’ on the M50 response — an indicator of the magnitude of neuron activity — than do controls, the study found.

The children with autism and sound sensitivity do not have a more severe form of autism than those who are not hypersensitive to sound, based on the Autism Diagnostic Observation Schedule, or ADOS, and the Autism Screening Questionnaire, the study found. However, the greater their sensitivity to sound, the more severe their behavioral problems are, as measured by the Child Behavior Checklist, a parental questionnaire focused on behavioral and emotional problems.

MEG could serve as an objective method to diagnose sound sensitivity, which in turn could lead to tailored behavioral therapies for children with autism, the researchers say.