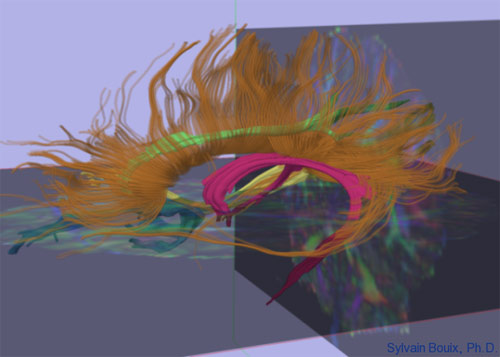 Neural links: Diffusion tensor imaging, which detects the flow of water in the brain, maps connections between brain regions.

The bundles of nerve fibers that connect two regions important for language are abnormal in the brains of children with autism, according to a study published 5 April in the American Journal of Neuroradiology1.

This difference is more significant in individuals who have both autism and language impairment than in those who have autism alone. It is also more pronounced in the left hemisphere than in the right, the study found.

Scientists have found abnormalities in the structure of white matter, which contains the connecting processes of neurons, and in the connections between brain regions in individuals with autism. In the new study, researchers looked specifically at the superior longitudinal fasciculus, or SLF, a bundle of nerve fibers that connects two language regions called Broca’s area and Wernicke’s area.

They used a method called diffusion tensor imaging, or DTI, which measures the rate of diffusion of water molecules along long swaths of white matter. Overall, the 35 children with autism in the study have greater diffusion of water in the SLF compared with 25 controls, the researchers found.

This may be because the neurons in these fibers bundle together less tightly, allowing the water to diffuse more freely and lessening the connectivity between brain regions, the researchers say.

These alterations are more pronounced in the 17 participants who have both autism and language impairment than in the 18 children who have autism alone. Overall, all children, including controls, who have lower scores on the Clinical Evaluation for Language Fundamentals test show more diffusion than those with higher scores. This is particularly true in the left hemisphere of the brain, according to the study.

These findings suggest that white-matter abnormalities in the SLF may underlie the language deficits seen in autism, the researchers say.