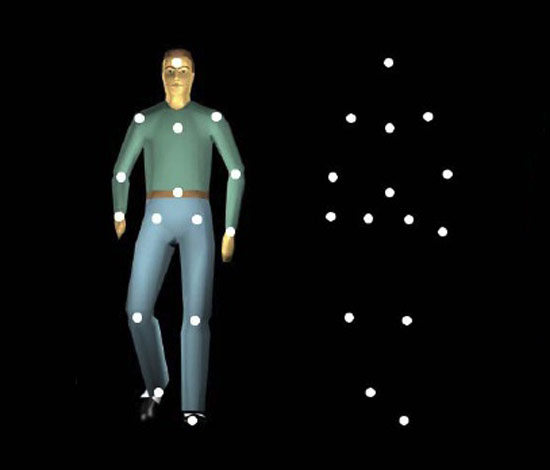 Stick figure: Most people can easily detect the outline of a walking person or animal even when it is represented only by simplified points of light.

Adults with autism who have high intelligence quotients (IQ) are better at identifying the direction of biological motion than are those with lower IQ scores, according to a study published 3 May in the Journal of Autism and Developmental Disorders1.

This difference could be the result of compensatory mechanisms for detecting social cues, the researchers suggest.

However, other studies have shown that individuals with autism detect biological motion with the same accuracy as controls do2.

These studies are often based on children, whereas the new study looks at adults, who may have developed coping strategies over time.

In the study, adults with autism looked at videos of walking humans, cats and pigeons, represented by points of light attached to their joints and limbs. The researchers also obscured the images with additional lights that move in the same direction.

Adults with autism and controls are equally good at detecting the direction the figure faces.

Within the group with autism, however, individuals with higher IQ scores are better at detecting the figure’s direction. IQ scores have no influence on accuracy in the control group.

Interestingly, individuals with autism who have higher IQs have less trouble with upside-down images than those with lower IQ scores. This suggests that these individuals have developed compensatory strategies for identifying motion that are distinct from those in controls.

A study last year showed that unaffected siblings of individuals with autism use different brain regions when detecting biological motion than do either people who have autism or controls.