Cognition and behavior: Individuals with autism not tuned in to human motion 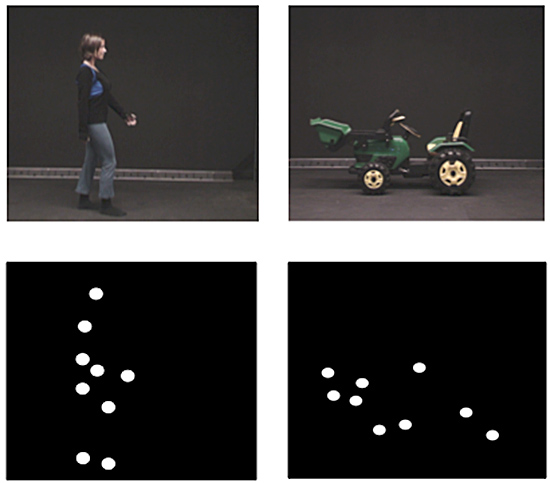 Moving evidence: Individuals with autism are no better at detecting people (left) than tractors (right) in abstract point-light animations.

Researchers at Yale University created animations of human and object motion by pinning points of light on either a walking person or a moving tractor. They then scrambled these points to create examples of random movement.

The researchers showed 38 participants both random and non-random animations and asked whether the points represented a person or a tractor. Participants were expected to recognize figures in the non-random movement, but not in the scrambled format.

The six participants diagnosed with autism detected both human and object motion with equal ease. The 32 controls, in contrast, did better at detecting the motion of humans than of tractors. The researchers are repeating the trials with more participants.

Similar studies with point-light animations have shown that 2-year-olds with autism do not pay more attention to upright animations of people compared with the same images turned upside down. But other studies suggest that those with autism have trouble visually detecting all forms of movement.

The new report resolves this contradiction by directly contrasting human and object motion. The finding that those with autism are equally sensitive to both supports the hypothesis that they are not as tuned in to socially relevant cues as are controls.