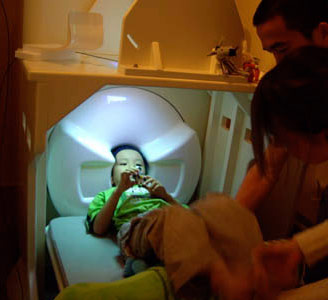 Magnetic measure: A non-invasive technique detects atypical brain responses that could serve as biomarkers of autism.

An abnormal response to sound may distinguish children with autism from those with specific language impairment (SLI), according to a study published 30 May in Neuroreport1. A non-invasive technique called magnetoencephalography (MEG) can detect this response and may help diagnose autism, the researchers say.

Researchers are trying to find a more objective measure, or biomarker, that could diagnose infants with autism before symptoms become apparent.

In a follow-up study published last year, the researchers investigated the mismatch field latency, or MMF, a brain response detected by MEG that peaks after individuals hear an unusual sound. Children with both autism and language impairment have, on average, a 50-millisecond delay in the MMF compared with controls, the study found. The researchers suggested that this delay in sound processing could explain language deficits broadly, beyond those seen in autism.

However, these children have an M100 response that is indistinguishable from that of controls. This suggests that the M100 delay is an autism-specific biomarker, the researchers say, and may contribute to diagnosing the disorder.