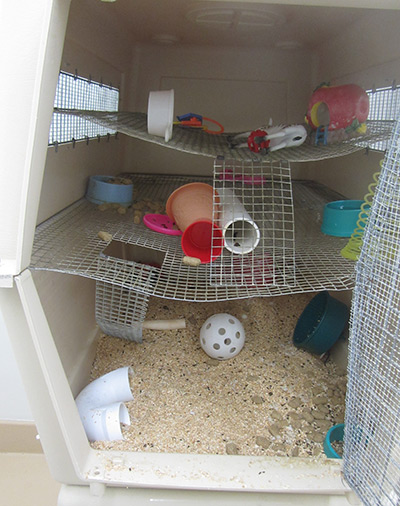 Happy place: Enriched environments, which include toys and activities, improve symptoms in mouse models of autism and related disorders.

Spending a month in a stimulating cage filled with wheels and toys alleviates repetitive grooming in a mouse model of autism, according to a study published 28 June in Autism Research1.

The researchers suggest that this provides support for sensory-based autism interventions, which engage children in their physical environments — for example, by having them touch differently textured objects2.

BTBR mice do not carry any known mutations in autism-linked genes, but they naturally show behaviors that resemble traits of autism. These include a lack of interest in other mice and repetitive behaviors, such as incessant grooming. The mice also groom in a rigidly predictable manner, starting at the face and finishing with the tail. Although most mice follow this sequence, they sometimes deviate, whereas BTBR mice almost never do.

In the new study, researchers divided 7-week-old BTBR and control mice into two enclosures: a standard laboratory cage or a large dog kennel divided into three floors. These floors are connected by wire ladders and are filled with tunnels, wheels and children’s toys. The researchers changed the toys every five days to keep them novel.

The enriched cage has no effect on grooming in the control mice, suggesting that it influences a unique feature of BTBR mice.

The results suggest that stimulating sensory perception could influence some aspects of the repetitive behavior seen in people with autism, the researchers say. A similarly enriched environment has been shown to improve symptoms in mice that model other autism-related disorders, such as Rett syndrome and Potocki-Lupski syndrome.