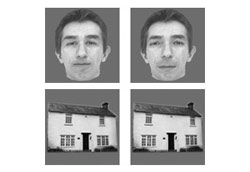 Detecting differences: Relatives of people with autism are only slightly better at discriminating between faces than between houses.

Relatives of individuals with autism recognize faces and emotions better than people with autism do, but not as well as typically developing controls do, according to a study published in December in Autism Research.

People with autism have a well-described aversion to eye contact and do not recognize familiar faces or emotional expressions as well as typically developing peers do.

Family members of people with autism often have some features of autism, called the broader autism phenotype, which may be due to a subset of genetic risk factors. This phenotype includes difficulty processing information from faces, according to the new study.

Researchers showed pairs of pictures of faces and houses with subtle variations — such as a wider distance between the eyes or windows — to 26 adults with autism, 22 parents and adult siblings of people with autism and 26 typically developing controls. Each group can detect differences between houses with the same accuracy, but controls are better than either of the other groups at seeing differences between faces. People with autism are only slightly better at discriminating between faces than between houses, however.

Relatives of people with autism are better than those with autism at detecting differences between faces, but worse than controls are, the study found.

Like people with autism, relatives are also less able than controls to identify facial expressions of fear and disgust. They are as accurate as controls are and better than those with autism when identifying expressions of surprise and sadness, however.