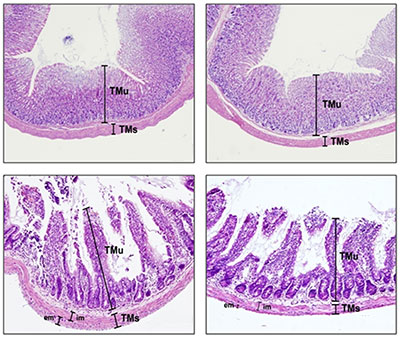 Tummy tuck: Rats exposed to valproic acid during gestation (right) have thinner mucus linings in their stomach (top) and small intestine (bottom) than controls (left) do.

In utero exposure to the epilepsy drug valproic acid (VPA), which ups the risk of autism, may alter the composition of gut bacteria in rodents, according a study published 11 December in Brain Behavior and Immunity1.

Rats and mice exposed to VPA in utero have social deficits, repetitive behaviors and anxiety, making them a good model for studying autism. It is unclear exactly how VPA exposure leads to these symptoms, however.

The new study looked at the composition of gut bacteria in mice exposed to VPA in utero. Changes to this so-called microbiome are known to influence behavior in mice. Also, many people with autism suffer from gastrointestinal problems.

Mice exposed to VPA have the same overall diversity of gut bacterial species as controls do, the study found. However, they have less of one species called Bacteroidales and more of another called Clostridiales. VPA-exposed mice also generate more butyric acid, a particular byproduct of gut bacteria, than controls do.

These differences are more pronounced in male mice than in females, and are associated with a lack of interest in other mice, the study found. Autism is likewise four times more common in boys than in girls.

In another study, published in September in Toxicological Research, researchers found that rats exposed to VPA in utero have thinner mucus linings in their stomachs and small intestines than controls do2. They also have less gut motility, which aids in digestion, than do controls.

Together, the results suggest that exposure to VPA in utero affects the gastrointestinal tract and may underlie the observed altered behavior.