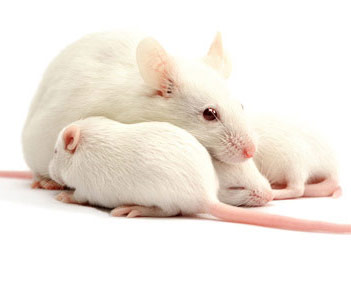 Cautionary tail: An environmental toxin that accumulates in breast milk leads to social deficits in the offspring of exposed mice.

Cautionary tail: An environmental toxin that accumulates in breast milk leads to social deficits in the offspring of exposed mice.

A commonly used flame retardant may lead to deficits in sociability, learning and memory in healthy female mice and those that model Rett syndrome, according to a study published 15 February in Human Molecular Genetics1. The effects are different in Rett syndrome models compared with healthy mice, suggesting underlying gene-environment interactions.

DNA methylation, a type of epigenetic modification — chemical changes that turn genes on and off without altering the DNA sequence — likely mediates these changes, the study also shows.

Studies have identified numerous genetic risk factors for autism, but none of them account for the majority of cases of the disorder. Many researchers propose instead that a combination of multiple mutations and environmental factors could lead to the disorder. However, the molecular mechanisms underlying such gene-environment interactions are poorly understood.

In the new study, researchers investigated the effect of BDE-47 — a type of polybrominated diphenyl ether, or PBDE, which are commonly used as commercial flame retardants — on mice that model Rett syndrome, a single-gene disorder associated with autism. Studies show that BDE-47 can be found in human tissue and is present at particularly high concentrations in breast milk2.

Rett syndrome mice have a mutation in MeCP2, which detects DNA methylation and regulates the expression of thousands of genes. Because MeCP2 is on the X chromosome, a single MeCP2 mutation leads to more severe symptoms in males than in females.

Female mice with a MeCP2 mutation mated with male controls and gave birth to mixed litters of male and female mice, some of which have MeCP2 mutations. The researchers fed these mothers low levels of BDE-47 from four weeks pre-conception to three weeks of lactation, then observed the effect of the chemical on their offspring.

The resulting levels of BDE-47 in the brains of the mother mice are similar to those found in postmortem human brains, the study found. This suggests that the BDE-47 treatment corresponds with our environmental exposure to the chemical, the researchers say.

Genetically typical female pups that were exposed to BDE-47 in utero emit fewer ultrasonic vocalizations when separated from their mothers compared with untreated mice, the study found. They also show less interest in a novel mouse in their environment than in an object and take longer to learn the location of a hidden platform in a water maze, suggesting social deficits and problems with learning and memory.

Male pups exposed to the chemical have fewer symptoms than females do, only showing a reduction in vocalizations when separated from their mothers.

However, having the MeCP2 mutation appears to worsen some and improve other symptoms of BDE-47 exposure in healthy female mice, the study found. Specifically, these mice are more likely to investigate a novel mouse than are control females that were also exposed to BDE-47 in utero, but take even longer to learn the location of the water platform. These results suggest that the MeCP2 mutation modulates the effects of BDE-47 exposure.

The exaggerated effect of BDE-47 on female compared with male mice may be due to differences in DNA methylation, the study found. Both control and MeCP2 mutant female mice exposed to the PBDE have decreased DNA methylation in their brains compared with unexposed mice, whereas males do not.