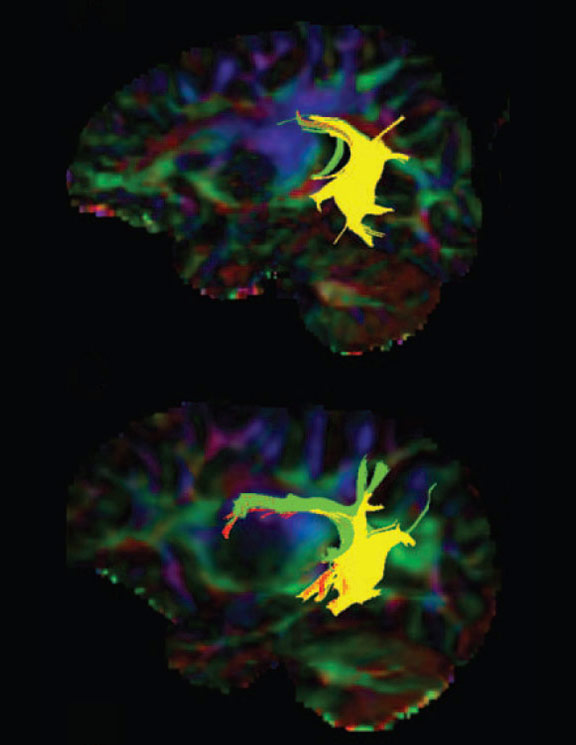 Abnormalities in the connections between language-related brain regions are similar in people with autism and those with tuberous sclerosis, a genetic disorder characterized by benign tumors throughout the brain and body, according to a paper published 1 June in Cerebral Cortex1.

Tuberous sclerosis is caused by the lack of either the TSC1 or the TSC2 gene. About half of people with tuberous sclerosis also have autism, suggesting that the two may have the same neurological basis. However, studies have not shown an association between the location or number of tumors in the brain and the odds of having an autism diagnosis2.

In the new study, researchers used diffusion tensor imaging, which maps connections between brain regions, to scan the brains of 12 individuals who have both tuberous sclerosis and autism, 20 who have tuberous sclerosis alone, and 42 controls. In particular, they looked at the arcuate fasciculus (AF) — one component of the superior longitudinal fasciculus (SLF), a brain tract made up of bundles of the connecting projections of neurons.

The SLF connects Broca’s area and Wernicke’s area, two brain regions associated with language ability. Studies have found potentially weaker connections across the SLF in the brains of people with autism than in those of controls.

Specifically, individuals with both disorders may show faster diffusion of water along the AF, a measure called mean diffusivity. Water molecules also flow along this tract with less directionality, or fractional anisotropy. Both measures suggest less connectivity between Broca’s and Wernicke’s areas than would be found in controls.