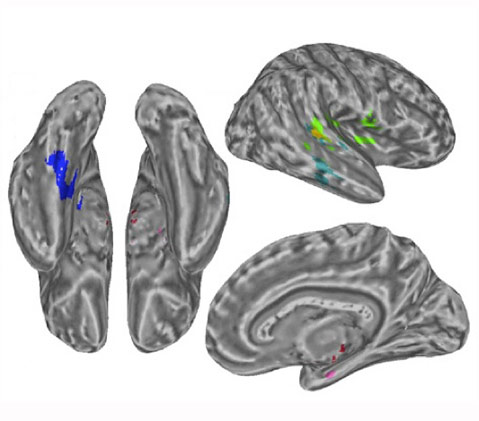 Inner circles: Children with autism have abnormally strong connections in deep regions of the brain (colored above).

Children with autism show abnormally strong synchrony between deep and outer layers of the brain, according to a study published online 31 December in Biological Psychiatry.

When the brain of a child with autism is at rest, the striatum — a buried middle region involved in planning movements and processing rewards — tends to ramp up and down in sync with the insula and with the right superior temporal gyrus — more superficial areas of the brain that have been implicated in autism. The striatum also shows high synchrony with the pons, the spherical region at the top of the brain stem that regulates breathing and sleep.

Most brain imaging studies of autism have focused on the cortex, or outer layers of the brain. The new findings highlight the importance of probing deeper brain regions, which form much earlier in fetal development.

Using a technique called resting-state functional connectivity, the researchers observed brain patterns of 20 children with autism and 20 healthy controls while they lay passively in a magnetic resonance imaging scanner for about seven minutes.

The hyperconnectivity between the striatum and the insula seems logical, as the region is important for social processing, empathy and integrating sensory information. Likewise, the right superior temporal gyrus has been linked to language processing in children with autism.

These findings have intriguing implications for the well-known connectivity theory of autism, which says that individuals with the disorder have weak long-range connections. In healthy people, these longer connections get stronger with age, leading some to suggest that autism is the result of immature circuits.

The research that supports this theory has mostly focused on connections within the cortex, however. Because the new study shows abnormally strong connections between deeper areas of the brain and the cortex, the authors suggest that autism is the result of abnormal, rather than immature, circuits.