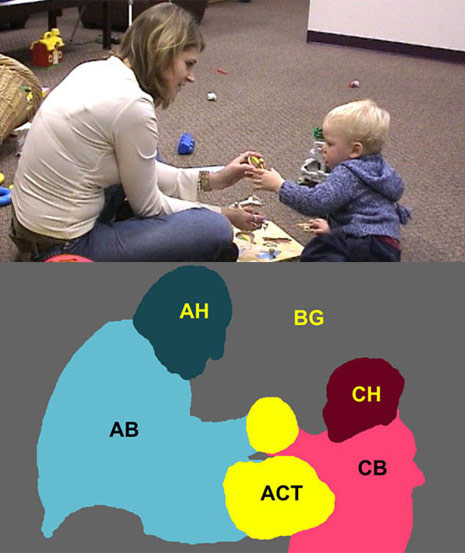 Image courtesy: Brain Research Attention zones: Children with autism look at the background of a scene, and adults’ or children’s bodies, compared with controls, who watch the action and people’s heads.

Children with autism are less interested in watching an activity, such as a parent and child putting together a puzzle, compared with typically developing controls, according to a study published in November in Brain Research.

Paying attention to the actions of others is one way that children learn socially relevant information. Children with autism are less tuned in to social cues, and may also pay less attention to the activities themselves. They often misuse objects, shaking toy cars, for example, suggesting that they do not grasp their proper use.

The researchers showed the participants 30-second videos of adults playing with children and compared how long each of them watched the activity itself, the background and the people.

Children with autism looked at the background almost as much as at the game itself, whereas the other two groups spent the most time looking at the activity, the researchers found.

Although the children with autism looked at the people in the scene as much as the control groups, they preferred their bodies rather than their heads. This finding is in line with eye-tracking studies showing that people with autism avoid eye contact.

The amount of time that the children with autism watched people’s bodies instead of their heads also correlates to the severity of their autism, based on the Autism Diagnostic Observation Schedule, the researchers found. This finding strengthens the idea that clinicians could use eye tracking to diagnose the disorder.