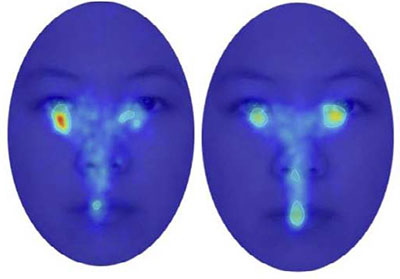 Focal point: When looking at faces, children with autism (left) tend to look just below the right eye rather than at the eye as controls (right) do.

When trying to recognize a face, children with autism look at the same general features as controls do, but tend to focus on the right eye rather than the left, according to a study published 8 August in the Journal of Vision1.

They also tend to look just below the eyes, instead of at the pupils.

Studies have found that children with autism struggle to recognize emotions and faces. They also look at faces in unusual ways, often preferring to look at the mouth rather than the eyes. This may help explain why they miss social cues and have trouble interacting with others.

The new study looked at how 20 Chinese children with autism, 21 age-matched controls and 21 controls matched for intelligence quotients look at faces. The researchers showed the children pictures of three faces. They then showed them a series of faces, some new and some not, and asked the children whether they’d seen that face before. During the test, they followed the children’s gaze with an eye-tracking apparatus.

As expected, the children with autism spent less time looking at faces and were worse at face recognition than either of the control groups. However, when the researchers compared how long each group looked at specific areas of faces, they found that children with autism look at most regions about as long as others do.

The one exception to this is the eye region. Children with autism look less at the left eye than do controls, and more at the right. They are also more likely to look just below the right eye than at the pupil.

Children with autism may avoid this area because the left side of the face tends to convey more emotional information than the right side, as some studies have shown2, the researchers say.

The researchers also tracked how the children shifted their gaze around the face — for example, how often they moved their gaze from the eyes to the mouth. These patterns are overall similar across the groups, but the children with autism are less likely to look from one eye to another than controls.

In a separate article published 3 October in Autism Research, the researchers found similar results for eye contact in participants with an average age of 20 years3. That study compared 19 individuals with autism, 22 with intellectual disability and 28 controls.