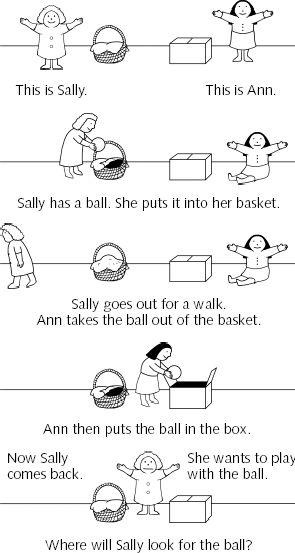 Hide and seek: Children with autism often fail a classic test designed to test their theory of mind.

With the right incentive, such as winning a prize, children with autism do fairly well at inferring the thoughts and beliefs of others, according to a study published in the May issue of Developmental Science1.

Research has shown that children with autism usually struggle with a widely used test designed to gauge this ability, called theory of mind. The new study suggests that they are able to grasp theory of mind, but don’t have a strong motivation to give the correct answer when taking the classic test.

The particulars of the test vary, but children are generally told a story in which two characters (often called Sally and Ann) place an object in a basket. After Sally leaves the room, Ann moves the item into a box. The child passes the test if he or she knows that Sally will look for the item in the basket and not the box.

Typical children struggle with this test as 3-year-olds, but most pass it by 5 years of age. The majority of children with autism continue to fail the test well into their teenage years2. Adults with autism are usually able to pass the Sally-Ann test, as it is often called, but struggle with more subtle examples of theory of mind.

In the new study, the researchers revised the Sally-Ann test into a game. For typically developing children, the motivation to answer a question correctly may be tied to a desire for social interactions. In contrast, children with autism may use theory of mind when they want something concrete, for example when competing for things with a sibling, the researchers say.

In the new test, the children think they’re competing with two people — named Dot and Midge — for a toy car or ball: Whoever finds the toy first can keep it.

As in the Sally-Ann test, the researchers place the toy in one container and then move it after one participant (Midge) leaves the room. The children have to wait for either Dot or Midge to try to win the toy before they have their turn. But they can choose whether Dot or Midge goes first. If they grasp that Midge doesn’t know where the toy was moved to, they are more likely to pick her.

The researchers gave both the Dot-Midge and the Sally-Ann test (using dolls to represent the two characters in the latter test) to 23 high-functioning children with autism ranging from 7 to 13 years old, and 73 typically developing children split into three groups with an average age of 3 years, 4 years and 2 months, and 4 years and 8 months. Each child took the tests twice.