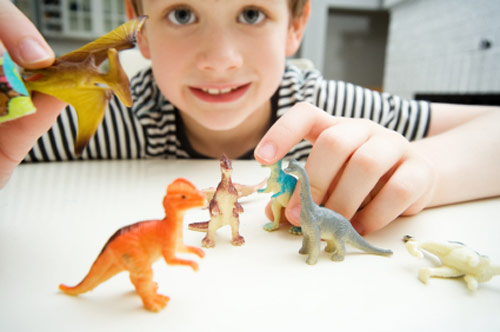 Favorite toys: Obsessive interests and an insistence on sameness, core diagnostic features of autism, are difficult to diagnose in young children.

Smaller-than-normal volume in several brain regions, including a region involved in relaying motor signals, could be a marker for repetitive behavior in 3-year-old children1, according to a study published 7 April in Autism Research.

Autism is characterized by symptoms in three core domains: problems with social interactions, deficits in language and communication, and repetitive behaviors and restricted interests.

The last category is the most variable and difficult to diagnose, especially in younger children. Repetition is a feature of normal development and learning in toddlers. Lacking the words to describe their fascination, toddlers also cannot convey the obsessive interests that become apparent as they grow up.

Repetitive behaviors are frequently present in other developmental disorders, such as obsessive-compulsive disorder, making it even more difficult to pin down as a symptom of autism.

In the new study, 77 toddlers with autism were more likely to have repetitive behaviors than 34 toddlers with other developmental disabilities, the researchers found.

Using three gold-standard clinical assessments to rate the severity of these symptoms, the researchers show that it is possible to diagnose repetitive behaviors in children as young as 3 years of age.

They also screened 45 of the children who have autism using magnetic resonance imaging. The children with more severe repetitive behaviors have a smaller brain volume in the left thalamus, the right globus pallidus, the left and right putamen and the right striatem, they found.

The study suggests that imaging tools could diagnose repetitive behaviors, and that the behaviors have a neurological basis. The researchers intend to follow the same children in an ongoing study of these brain regions over time.