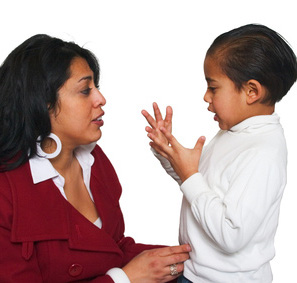 A gesture life: Bilingual children are better at nonverbal communication than are those who speak only one language.

Being fluent in both English and Spanish may boost the use of communicative gestures in children with autism, according to a study published 1 August in the Journal of Child Neurology1.

It’s well established that bilingualism has many cognitive benefits. Even among children with autism, two studies published last year showed that those who are bilingual score similarly on language and vocabulary tests to those who speak only one language.

Still, because language difficulties often accompany autism, some clinicians hold that bilingualism is not advisable for children with the disorder.

In the new study, researchers looked at the medical records of children under 3 years of age with autism who attended the Children’s Evaluation and Rehabilitation Center, which is affiliated with the Albert Einstein Medical Center in New York. The children were diagnosed based on criteria outlined in the Diagnostic and Statistical Manual of Mental Disorders, the Autism Diagnostic Observation Schedule and the Childhood Autism Rating Scale.

Studies have shown that toddlers with autism are less likely than controls to use gestures when communicating. Researchers consider gestures such as pointing to be a component of joint attention, which is the ability to engage or follow others’ attention. Teaching joint attention skills to children with autism has been shown to improve their language ability later in life.

The results echo those from studies of typical children showing that speaking more than one language can boost the use of gestures2.