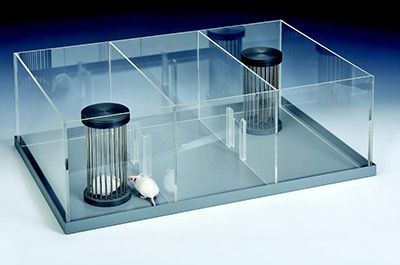 Introducing gut bacteria to mice that lack them increases their sociability, but mainly with familiar mice, reports a study published 21 May in Molecular Psychiatry1.

Studies have shown that gut bacteria can influence both the brain and behavior in mouse models of autism. For instance, feeding Bacteroides fragilis, a bacterial species that’s common in the human gut, to a mouse model of autism alleviates anxiety and decreases repetitive behaviors in the mice.

About 70 percent of children with autism are reported to have gastrointestinal problems, compared with 28 percent of controls. Together, these findings suggest a connection between the gut and autism in a subset of cases.

In the new study, researchers tested the sociability of mice raised in bacteria-free conditions. These ‘germ-free’ mice have substantially fewer gut bacteria than control mice and show symptoms, such as repetitive behavior, that are reminiscent of autism.

The researchers placed the mice in the middle chamber of a three-chamber set-up, with an empty cage on one side and a caged mouse on the other. Control mice spent more time with the caged mouse than they did in the empty chamber. The germ-free mice instead prefer the empty chamber, and the effect is more pronounced in males than in females.

When the researchers put a new mouse in the empty cage, the controls spent less time interacting with the familiar mouse than with the new mouse. The germ-free mice spent about equal time with each.

When a new group of germ-free mice was exposed to bacteria, they became more social than the previous set, spending more time with the caged mouse. They also spent less time grooming themselves during social interactions than the germ-free mice without bacteria.

However, the mice exposed to bacteria also do not show a significant preference for the unfamiliar mouse over the familiar mouse.