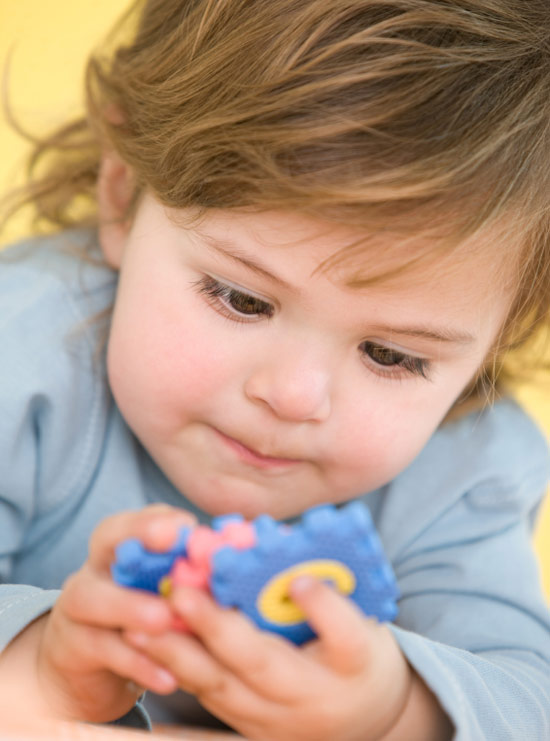 Babies with fragile X syndrome spend more time looking at a toy before switching their attention elsewhere than do healthy controls, according to a study published 1 July in the Journal of Autism and Developmental Disorders1.

What’s more, babies who take the most time to disengage tend to develop more severe features of autism, the study found. This suggests that testing for visual attention could be useful for predicting which babies with fragile X will later develop autism.

Fragile X syndrome is a rare genetic disorder characterized by intellectual impairment, hyperactivity and social avoidance. An estimated one-third of individuals with fragile X also have autism, but this is the first study to examine early signs of autism in babies with the syndrome.

Studies of siblings of children with autism have shown that at 12 months of age, those who go on to develop autism spend less time looking at faces than do controls.

In the new study, researchers analyzed gaze in 13 boys with fragile X syndrome and 10 typically developing controls, all at 12 months of age, as they played at a table across from a video camera.

When seeing a toy for the first time, boys with fragile X syndrome looked at it for an average of 18.3 seconds before looking elsewhere, the study found. By contrast, typically developing boys looked for 8.8 seconds. The difference is not statistically significant. It also does not include an outlier in the fragile X group whose time before disengagement — 150 seconds — was unusually long.

The fragile X group spent 74 percent of the three minutes looking at the toy, whereas controls spent only 45 percent.

At 18 months of age, the severity of the babies’ autism symptoms slightly correlates with the total time spent looking at the toy during the previous session. The researchers measured the symptoms using the Childhood Autism Rating Scale, which scores children’s behaviors in 15 categories, such as relating to people and adapting to change.

During the initial play sessions, the researchers also simultaneously recorded the babies’ heart rates. Previous research on healthy babies has shown that heart rates tend to slow and stabilize during long periods of focused attention, and increase when disengaging2.

Babies with fragile X syndrome show a higher, and less variable, heart rate during play than do controls, the study found. This suggests that individuals with the syndrome live in a steady state of heightened physiological arousal, and show a dulled response to changes in their sensory environment.