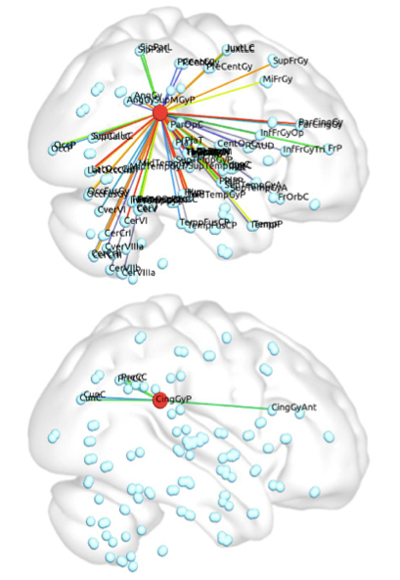 Network hub: People who have many traits of autism, such as restricted interests and clumsy movements, have weaker connections between certain brain regions (bottom) compared with those who have only a few of the traits (top).

People who show strong autism traits tend to have weak connections between the posterior cingulate cortex and other areas of the brain, according to a study published 5 April in PLoS One1.

The posterior cingulate cortex is involved in introspection and social memories, and has been shown to have abnormal activity in people with autism2.

The ‘connectivity theory’ of autism contends that people with the disorder show abnormally weak connections between the frontal cortex and more posterior areas of the brain. But some studies have contradicted this idea, generating a lively debate among researchers.

In the new study, scientists in Hungary analyzed brain connectivity in 127 adult participants from the International Neuroimaging Data-Sharing Initiative, a large, free repository of data from brain scans and psychological tests.

The researchers compared participants’ brain activity at rest with their scores on two tests of autism traits: the Autism Spectrum Screening Questionnaire (ASSQ) and the Social Responsiveness Scale. For both tests, scores rise with increasing social impairment.

The researchers analyzed the brain scans with a technique based on graph theory, a mathematical approach that describes relationships between objects using nodes of a graph connected by lines. Each brain region, or node, is connected to many others. The method determines the strength of each connection based on the synchrony of their firing patterns during the brain scan.

The posterior cingulate cortex and many of its connections belong to the ‘default mode network.’ This network of brain connections is active when people are not engaged in any particular cognitive task, and has been implicated in autism and related disorders.

The researchers also looked at participants’ brain scans using diffusion tensor imaging, which indirectly gauges the strength of connections by tracking the movement of water molecules.

Participants with strong autism traits have weaker nerve fibers linked to the parahippocampal gyrus, which is involved in memory, and the nearby fusiform gyrus, which is important for recognizing faces, the study found.