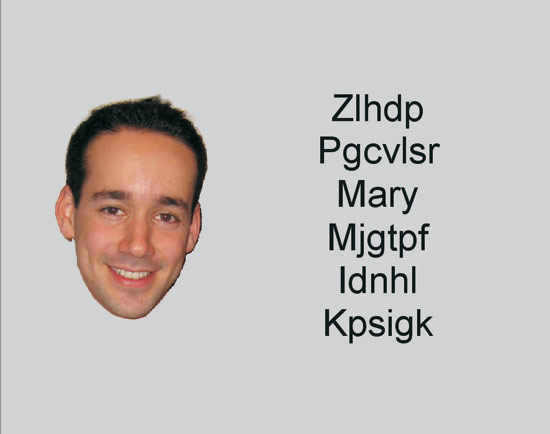 Mixed signals: Adults with autism are better able than controls to quickly identify the gender of a name while distracted by a face of the opposite sex.

Children with autism have more trouble switching their focus between sounds and pictures than do typically developing controls or children with intellectual disability, according to a study published 1 July in the Journal of Autism and Developmental Disorders1.

Similarly, adults with autism are less likely to be distracted by a face than are typically developing controls, according to another study published 24 June in Autism2.

Studies have shown that individuals with autism have difficulty switching their focus between different objects or faces. But it is unclear whether this is a cause or a consequence of the social deficits seen in people with autism.

In one, the children had to match the shape pictured on the back of a piece of paper with one of four shapes pictured on the front. In the second, they had to match images with written words. In the third, they looked at a picture showing four different items, such as various animals, and had to match one of those images to a spoken word.

The researchers scored the answers for accuracy and considered a delay of more than six seconds to be a wrong answer.

The children with autism were less accurate than both control groups in all three tasks, the study found. Unlike the controls, they also struggled more with the spoken-word task than with either of the two visual tasks.

The results show that children with autism have trouble switching attention between two modes of stimuli, in this case sight and sound. This could underlie deficits in language, which requires the integration of both types of information, the researchers suggest.

In the second study, 16 adults with autism and 16 controls watched a screen showing a list of nonsense words. In the first part of the experiment, the list also included the name of either a wind or a string instrument. The researchers asked the participants to identify the type of instrument, while a picture of another instrument popped up next to the list.

When there was only one word on the screen, both groups took longer to answer the question when the type of instrument shown did not match the name: for example, the word ‘tuba’ next to the picture of a cello. This suggests that the picture distracted them from focusing on the words.

When there were two to six words in the list, however, the participants were no longer distracted by the image. This suggests that as the task becomes more difficult, individuals are less likely to be distracted.

The results suggest that faces are especially distracting to typical individuals, but not to people with autism.