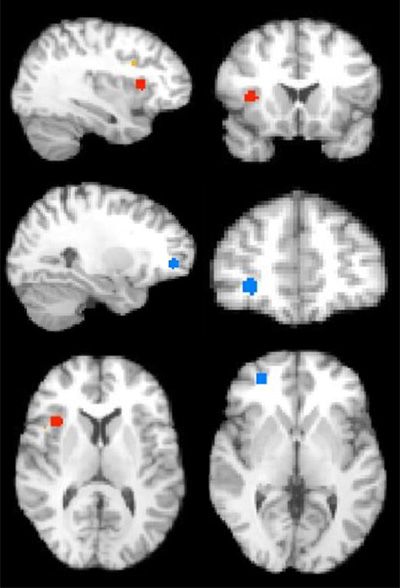 Brain blips: Children with autism have too much (red) or too little (blue) activity in certain brain regions.

Differences in brain activity that distinguish children with autism from controls may lessen with age, according to a meta-analysis published in the March issue of the Journal of the American Academy of Child and Adolescent Psychiatry1.

The study pulls together functional magnetic resonance imaging (fMRI) results from several studies of both children and adults with autism, building a picture of changes in the disorder over time.

Observed differences in brain activity between individuals with autism and controls suggest that certain brain regions are less active in people with autism than in controls, or that these regions need to work harder in order for someone with autism to complete the same task.

Most results are based on small studies, however, usually focused on a single age group. To compare a large number of participants, the researchers pooled data from 18 fMRI studies of children with autism and 24 of adults with the disorder. Together, the studies include data from 535 children (262 with autism and 273 controls) and 604 adults (288 with autism and 316 controls).

During social tasks, children with autism show more activity than controls do in the left postcentral gyrus, which detects the sense of touch. They show less activity than controls do in the right hippocampus and the right superior temporal gyrus, which are involved in memory and language, respectively. These differences lessen when comparing adults who have autism with controls, the study found.

Similarly, during nonsocial tasks, children with autism show more activity in the right insula and the left cingulate gyrus than do controls. These regions play a role in consciousness and emotion processing, respectively. Children with autism show less activity than controls in the right middle frontal gyrus and in the frontal lobe, which regulates reward, attention and short-term memory. These differences are again less significant when comparing adults who have autism with adult controls.

The results are reminiscent of studies of brain size, which have shown that children with autism have large heads that normalize as they reach adulthood.

Long-term studies on the same individuals as they age will help scientists better understand how brain function changes in autism over time, the researchers say.