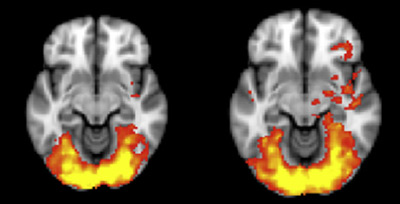 Sound overload: Brain regions that processes emotion react more to white noise in children with autism (right) than they do in controls (left).

When exposed to irritating noises or images, children with autism show hypersensitivity in brain regions that process sensory information and emotions, according to a study published in November in the Journal of the American Academy of Child and Adolescent Psychiatry1.

Children who have the strongest responses in these regions are also the most likely to react negatively to sensory stimuli, such as loud noises, the study found. This suggests that hyperactivity in this region may underlie the sensory sensitivity often described in autism.

Some form of sensory sensitivity — such as objecting to loud noises and crowded environments or seeking out certain sensations — affects most children with autism.

In a 2012 study, researchers found altered brain responses to sound in children with autism who are sensitive to loud noises. This study relied on magnetoencephalography — a brain imaging technique that detects the magnetic signals emitted by active neurons.

In the new study, researchers used functional magnetic resonance imaging (fMRI), which detects changes in blood flow across the brain in response to activity. They scanned the brains of 25 children with autism and 25 controls as they experienced mildly irritating sounds (white noise) and visuals (rotating spirals of color), both alone and in combination.

Parents of the participants filled out two questionnaires that gauge atypical sensory responses —  the Sensory Overresponsivity Inventory and the Short Sensory Profile — as well as the Child Behavior Checklist, which measures problem behaviors, including anxiety.

Elevated response to stimuli by fMRI correlates with sensory sensitivity, but not with anxiety, the study found. This suggests that alterations in the brain regions identified may be responsible for sensory symptoms in particular, the researchers say.