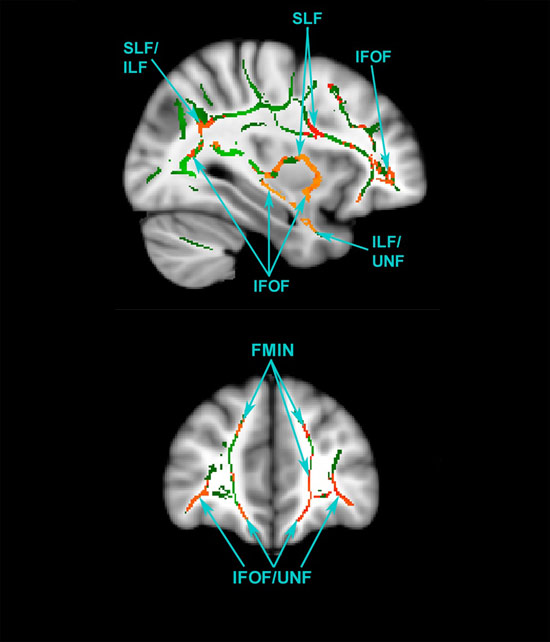 Power lines: Some neuronal fibers (orange) that connect brain regions are weaker in individuals with autism than in controls.

Power lines: Some neuronal fibers (orange) that connect brain regions are weaker in individuals with autism than in controls.

The brains of boys with autism have a lower-than-normal rate of water diffusion across the inferior fronto-occipital fasciculus — a bundle of neurons that connects all four major lobes of the brain — according to a study published 28 July in the American Journal of Neuroradiology1. The results support the connectivity theory of autism, which suggests that individuals with the disorder have impaired long-range brain connections.

These observations have led to the theory that people with autism have enhanced short-range but impaired long-range brain connections, which is supported by several brain imaging studies.

One technique, called diffusion tensor imaging, or DTI, looks at the flow of water across the brain. Water in the brain diffuses preferentially along large bundles of axons, the transmitting bodies of neurons, that connect brain regions.

Defects in connectivity in these regions could be an autism-specific neural phenotype, the researchers suggest.