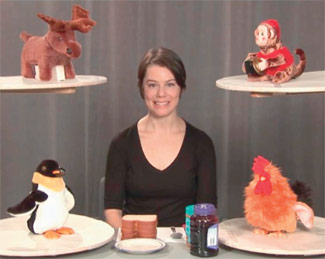 Averted gaze: Infants who later developed autism paid less attention to the actress in this video than did their peers.

Infants who are later diagnosed with autism are less attentive to the presence of a person onscreen at 6 months of age than their typically developing peers are, according to a study published 14 January in Biological Psychiatry1.

Children are diagnosed with autism well after marked impairments in their ability to interact socially, among other symptoms, are evident — usually around 4 years of age. But the processes that result in these symptoms are thought to begin long before.

One study from last year suggests that abnormal development of the nerve fibers in the brains of these children is evident at 6 months. Others have found that children who later receive an autism diagnosis show deficits in social interactions such as making eye contact or following another person’s gaze as early as 12 months2.

In an effort to see whether these sorts of signs are apparent at 6 months, the researchers enrolled 67 infants at high risk for autism (those who have an older sibling with an autism diagnosis) and 50 infants at low risk (those who do not).

Although increased attention to objects is sometimes considered representative of autism, the infants who later developed autism did not spend more time than the other infants paying attention to the objects on shelves around the actress.

The researchers note that in contrast to their findings, previous attempts to probe whether such behavioral deficits occur in younger children have mostly yielded negative results. They suggest that this may be because in previous studies parents or researchers worked to engage the child, and the behavior of the adults may have compensated for any deficits the child might have had.

Some studies have also focused on children at high risk for autism without specifying whether those children went on to develop the disorder, thereby clouding the results.