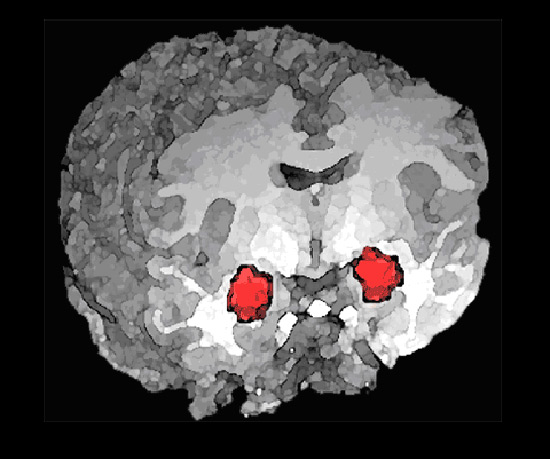 Social center: The amygdala, a region of the brain that recognizes emotions such as fear and anxiety, has been linked to autism.

Damage to the amygdala — a region of the brain that regulates emotional processing — does not cause autism, according to a study of two individuals with lesions in the region.

Structural and imaging studies have found abnormal amygdala function in people with autism. Several studies have also shown impaired social behavior reminiscent of autism in monkeys with amygdala lesions. The two individuals with lesions on both sides of the amygdala — including the famous S.M. — provided a rare opportunity to test this link.

The new study, published in September in the Journal of Neurodevelopmental Disorders, found that the two adults with lesions on both sides of the amygdala show no evidence of autism when given multiple diagnostic tests.

The results suggest that one brain area alone is unlikely to account for a complex disorder such as autism, the researchers say.

Still, the study, led by Ralph Adolphs and his colleagues at the California Institute of Technology, doesn’t rule out the possibility that the amygdala plays a role in the disorder. For example, abnormal connections between the amygdala and other regions of the brain could explain the decrease in amygdala function seen in individuals with autism.

What’s more, although the individuals in the study do not meet the diagnostic standard for autism, S.M., who has lesions across her entire amygdala, shows some differences in social behavior, including overfriendliness, inappropriate comments and a lack of awareness of personal space.